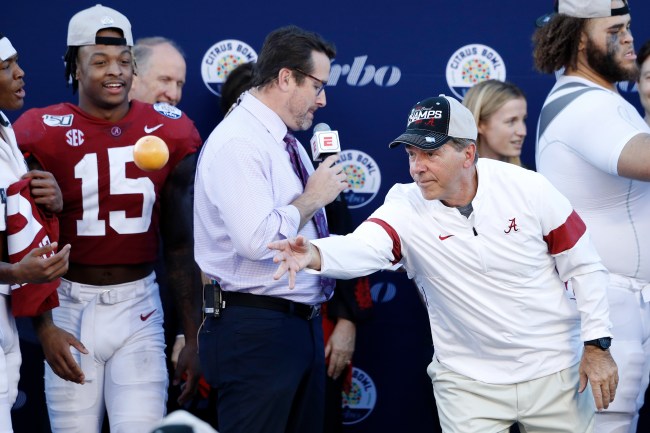 At the end of Wednesday’s Citrus Bowl game as Bama was already up 28-16 with 30 seconds left to go Nick Saban decided to continue running the ball which resulted in a score for the Crimson Tide.

Najee Harris finishes the drive with a TD! pic.twitter.com/adH8wwlvZv

Michigan fans weren’t happy that Saban decided score instead of kneeling the ball in the red zone with the game already in hand.

#CitrusBowl Classless Nick Saban has his guys get the TD already up 12 with 35 seconds to play. Yes, it was nice to reward Najee Harris with the TD as he ran the ball well that last series., but still… FINAL: Alabama 35, Michigan 16. pic.twitter.com/QslDn3uEc0

Absolutely classless coaching by Nick Saban. Probably thinks he has something to prove since he’s playing in the Dollar General Bowl. Show some sportsmanship!

@AlabamaFTBL What a DICK coach Saban is. Good job running up the score. Didn't make the Playoffs so let's run it up! #DickHead

Nick Saban just showed what a prick he is. Not taking a knee and running the score up is just plain bush league.