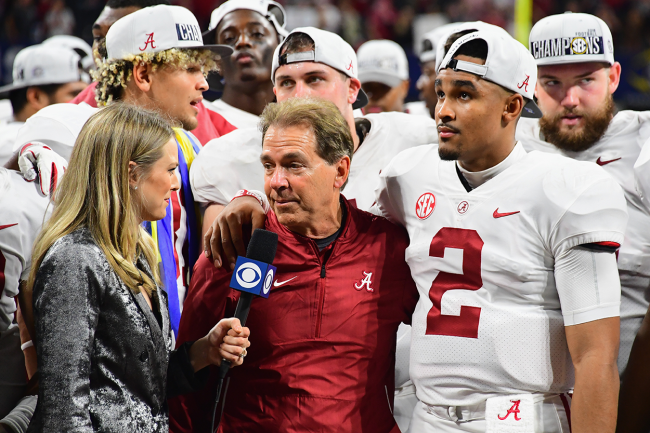 Nick Saban is the greatest college football coach of all-time. The 70-year-old has seven national championship rings and shows no signs of slowing down.

While Saban’s all-time collegiate coaching record of 269–67–1 is impressive, his legacy is felt well beyond wins and losses. While playing at Alabama may not be for everyone, those who choose to play, learn and grow under Saban’s tutelage rarely fail to become succesful.

Over the course of the last 15 years in Tuscaloosa, Saban has produced 113 NFL draftees. During that same period of time, the Crimson Tide alumni have made an astonishing amount of money in the National Football League.

A lot of that can be contributed directly to Saban. Or, at the very least, what he has built at Alabama.

To get a grasp on the legacy he has left behind, Saban’s greatness is exemplified by Eagles quarterback Jalen Hurts. Hurts played at Alabama from 2016 through 2018, was named the SEC’s Offensive Player of the Year as a freshman, won a national championship as a sophomore, and led the Tide to a comeback SEC Championship win as a junior.

Despite the fact that he has not played for Saban in four years — and spent a year under Lincoln Riley before the NFL — he still references his time with the greatest coach of all-time.

Hurts has played for three different coaches since leaving Tuscaloosa for Oklahoma and then Philly. But he didn’t reference Riley, Doug Pederson or Nick Sirianni. He still goes back to Saban.

Jalen Hurts referencing how his relationship with Coach Saban and his time at Alabama shaped him and helped him become a pro. pic.twitter.com/H1GV02BaQD

It just goes to show. Wins and losses are a dime a dozen, but when you create a culture that is greater than yourself, success follows closely behind and carries well beyond the present.