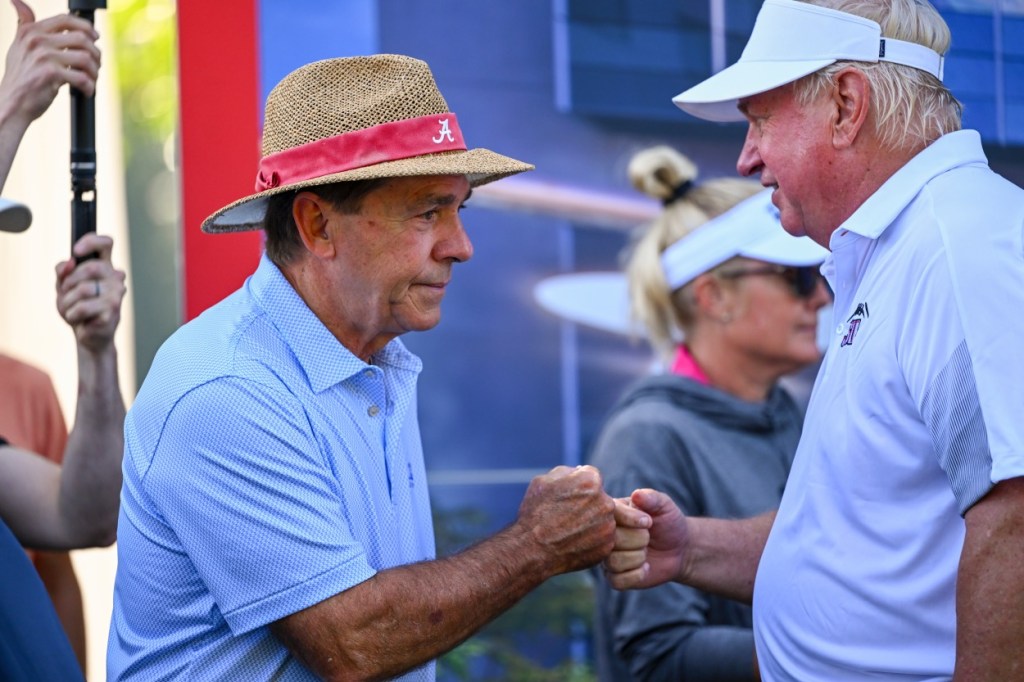 The fine coaches of the Southeastern Conference have all converged upon Destin, Florida for their annual meeting. This year’s big agenda is discussing whether the future of the SEC is an 8 or 9-game conference schedule. But the underlying drama has made this year’s SEC coaches meeting more interesting than years past.

We got a look at the seating chart for the meetings earlier. And it’s downright hilarious to see where Alabama’s Nick Saban and TAMU’s Jimbo Fisher have been sat after their recent public feuds.

There are always some choice quotes to come out of this late-Spring meeting but Nick Saban’s quote about his player’s NFL earnings led to an audible gasp from me. Nick Saban is ALWAYS recruiting even if he’s not speaking to ‘croots. He was asked about the 8 vs. 9 conference game schedules and gave this answer below while casually slipping in an amazing quote about his player’s NFL earnings.

Saban on 8 vs 9 SEC conference games:

Saban on just how much money Alabama players are making in the NFL.

Nick Saban casually mentions since 2010, Alabama players have made $1.7 billion playing in the NFL #alwaysrecruiting

The Crimson Tide head coach was asked about his recent comments regarding NIL money:

Nick Saban asked what evidence he has that Texas A&M bought its recruiting class: “I didn’t really say that anybody did anything wrong. I’ve said everything I’m going to say about this. I should have never mentioned any individual institutions as I’ve said before"

Florida Gators head coach Billy Napier is about to oversee his first season in The Swamp. He was *this close* to getting dragged into the Bama vs TAMU NIL drama but gave a diplomatic answer:

Florida’s Billy Napier on Saban-Fisher feud: "I’m not foolish enough to get caught commenting about that"

Alabama currently has 78 active players in the NFL. Those players are earning a cumulative $957,203,202 at this moment, according to Sportrac. I’m not at all questioning Nick Saban’s $1.7 billion figure and I fully believe that’s accurate, but some of those players have since left the NFL.