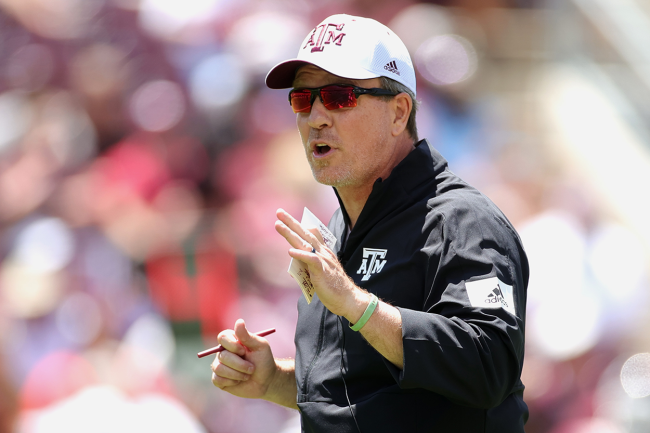 Jimbo Fisher has been a naughty boy. As a result, he has to sit at the teacher’s table in timeout. Basically.

Over the course of the past few weeks, the biggest headline in college football has surrounded Fisher’s feud with Nick Saban. It all started when the latter called out Texas A&M by name for allegedly enticing recruits to College Station with significant NIL money.

Saban even went so far to say that every single player in the Aggies’ greatest recruiting class of all-time is getting paid through NIL. That set Fisher into a tizzy.

The head coach of A&M called an impromptu press conference the very next morning and really went off on Saban, the claims that were made, and recruiting as a whole. It was wild and Lane Kiffin could not have been more entertained.

Later that afternoon, A&M athletic director Ross Bjork went crying to the SEC and sounded like a total hypocrite while asking for the conference to punish Saban. It completely backfired and the SEC gave both Saban and Fisher a slap on the wrist.

Not long thereafter, an extremely sweaty Fisher spoke with a reporter in more depth and got very, very feisty. It has been fairly quiet ever since.

However, this week could get very interesting as Fisher, Saban and the rest of the SEC head coaches gather for a meeting in Destin, Florida.

There could be fireworks.

In an effort to avoid anything particularly outlandish, the conference’s seating chart is very intentional. Saban and Fisher are NOT next to one another, and the man who must be the loudest in the room is sandwiched between some of the conference’s top officials.

Fisher is being babysat, in a sense. He is the only coach that is not sitting next to another coach.

The most anticipated tweet about SEC Spring Meetings. The Football coaches seating chart! Interesting that Jimbo is flanked by SEC officials. pic.twitter.com/KZF1FFl80H

To make things even funnier, Fisher is directly across from Kiffin. That will surely result in some hilarious eye contact between the two.