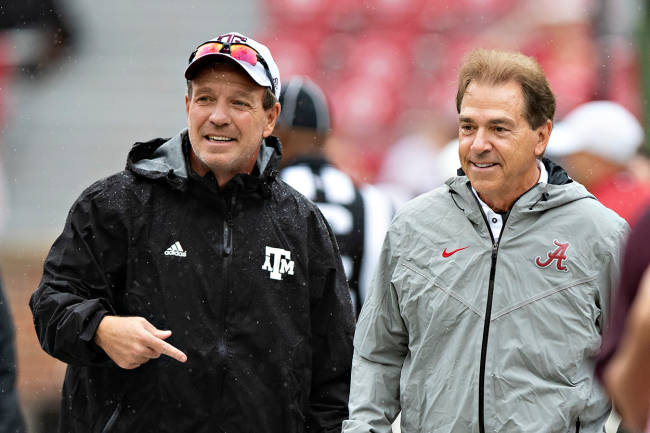 Nick Saban went full scorched-earth on the current landscape of college football and how Name, Image and Likeness is being used to “buy” recruits. In doing so, he called out Jackson State over a player believed to be Travis Hunter and Miami for John Ruiz’s bankroll, and claimed that Texas A&M “bought” every single one of its recruits in the Class of 2022.

In response to his former mentor at LSU and current SEC West counterpart, the Aggies head coach called a press conference on Thursday morning. He spoke for 10 minutes and answered questions from the media. From start to finish, Fisher’s mouth was moving a mile a minute and he was extremely riled up.

To open the press conference, the 56-year-old came out firing. He called Saban a “narcissist” and went so far as to say that the Alabama head coach thinks that he’s God. And then Fisher went on to end his relationship with Saban after saying that he has not answered any of his calls.

During the impromptu press conference, Jimbo Fisher did not hold back on NIL or Saban’s allegations.

Fisher wanted to be very clear that his team has never done anything wrong.

“A shame that we have to do this. It’s really despicable,” he said. “It’s despicable that somebody can say things about somebody and, more importantly, 17-year-old kids. You’re taking shots at 17-year-old kids and their families. That they broke state laws, that we bought every player on this group. We never bought anybody. No rules were broken. Nothing was done wrong.”

As for how he feels about Saban, Fisher thinks that he is being salty over his failure to obtain the No. 1-ranked recruiting class in 2022.

Fisher also tried to set the record straight about cheating. He would never do such a thing.

In addition, Fisher said that while growing up, those who lie used to get slapped. He thinks that maybe someone should have slapped Saban.

“I was taught when I was young if you cheat or lie daddy would slap you upside the head. Maybe someone should’ve slapped him.” pic.twitter.com/P3v50cpKgQ

During the diatribe from his holier-than-thou soapbox, Fisher also addressed Saban’s recent calls for parity. He has said in the past that players were paid illegally before NIL and implied that “certain people” — meaning Saban — were amongst them.

However, when asked if Saban specifically was amongst the cheaters, He declined to say yes or no.

Fisher said that he simply “made a statement,” as if he was taking the high road.

Then (I think?) asked if Saban broke the rules Jimbo replies “nah, didn’t say that. Just made a statement.”

Let’s see the receipts from these two!

Fisher also found it ironic that Saban made his comments about NIL and Texas A&M while soliciting money and likened him to Jesus, who once walked on water.

Jimbo Fisher said it was ironic Nick Saban made the comments while soliciting money: "When you walk on water, I guess it doesn’t matter"

In addition, Fisher said that he learned how to do things the right way from Bobby Bowden. He said that Saban taught him how not to do things.

Needless to say, there is some serious bad blood between Saban and Fisher. And it will only get crazier in the coming weeks. All of the SEC football coaches will be in the same room in just a few weeks.

As Lane Kiffin said, GET YOUR POPCORN READY.