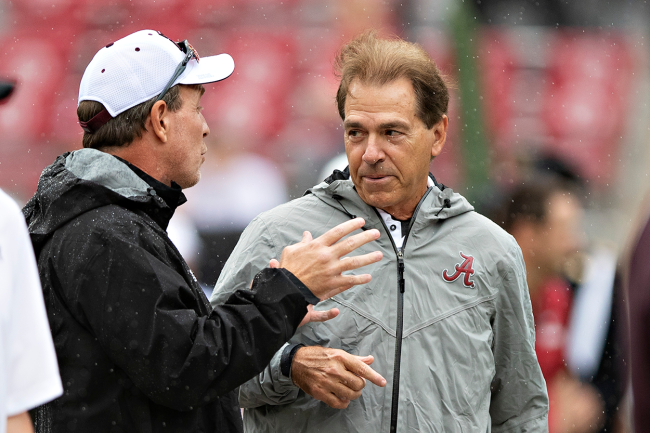 On Wednesday night, Nick Saban went on an almost seven-minute long rant about Name, Image and Likeness. In doing so, he called out Texas A&M over their recruiting practices and claimed that the Aggies bought every single one of their players.

Jimbo Fisher did not like that. The A&M head coach, who previously coached under Saban at LSU, took to the podium on Thursday morning and responded to the comments made by his SEC West counterpart.

Throughout the angry, passionate 10-minute defense of his players, coaches and program, Fisher had a lot of outlandish quotes. He continuously spoke about how his team has done everything by the book, how the Aggies did not “buy” a single player, and how they did not break any rules or laws.

Fisher also addressed his relationship with Saban after his comments on Wednesday and said that there no longer is one.

“Have you had any contact with Nick…” a reporter asked before he was cutoff.

In response, the reporter asked if he answered the phone.

Jimbo Fisher says that Nick Saban has called him, but that he didn't pick up and will not pick up. "We're done."

In the past, Saban and Fisher have been cordial to one another, if not friends. They worked together in Baton Rouge and have faced each other on the highest level multiple times.

Clearly, that will no longer be the case, which is particularly interesting considering how often they will have to interact. Saban and Fisher will be in the same room in two weeks for the SEC coaches meetings in Destin. Lane Kiffin is excited.

Did this really just happen??? @ClayTravis First time I can remeber being speechless. SEC Meetings in Destin 🫣 https://t.co/vlvQW4YWQ4 pic.twitter.com/V09xHyiIXz

And then, once the season begins in the fall, Texas A&M will face Alabama in Tuscaloosa on October 8th. Kiffin wants everybody to get their popcorn ready.

Clearly, the bad blood between Fisher and Saban has reached its boiling point. It left Kiffin speechless.

Just asked Lane Kiffin for his thoughts on Jimbo going scorched Earth on his old mentor, Nick Saban: "Speechless for the first time in my life."

Things are only going to get even more crazy in the coming weeks. Buckle up.