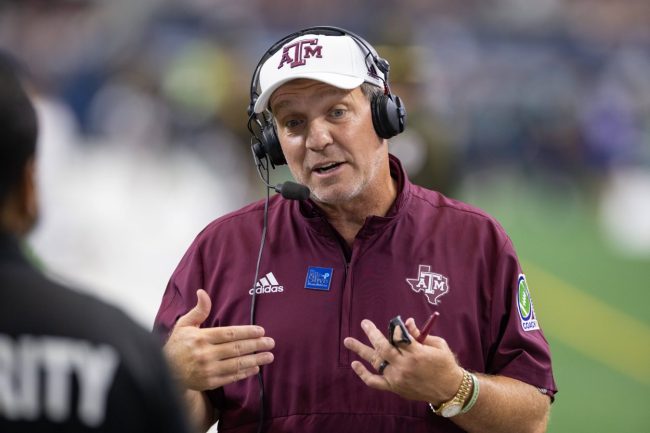 Texas A&M football has been the talk of college football in terms of recruiting this year. The Aggies hold the No. 1 recruiting class in the nation for 2022, which if it holds, would be the first time that a program topped Alabama or Georgia since 2010.

Six of the school’s 28 commits are five stars and 19 are four-stars. The class also includes two top-10 recruits and an in-state quarterback who is expected to be the starter as early as next fall.

It is an impressive effort that should set head coach Jimbo Fisher’s team up for success in the coming years. Either that, or they will be the best college football team in history to go 8-4, because that is what A&M does.

With the new era of Name, Image and Likeness, recruiting has a new twist. Schools can float the idea of a contract that could be available for a recruit if/when he chooses to enroll at that university. It isn’t a “this for that” situation, because that isn’t legal, but boosters can establish a fund behind-the-scenes that can pay out a recruit upon enrollment.

As a result, landing a top recruiting class is costly. Per reports, A&M’s class may have cost up to $25 million in prospective deals for NIL.

While that number is not, and never will be confirmed, the Aggies’ class likely cost a small fortune.

However, this is not the first time that recruits have been paid.

Prior to NIL, college football programs had to spend money under the table, allegedly. Bagmen (boosters) used to be set up around the country and would distribute stacks of cash in turn for a commitment.

It was not and is not legal. But it was happening.

Texas A&M head coach Jimbo Fisher admitted to that notion, without pointing fingers or implicating his own program, in his recent comments to the Houston Chronicle. He said that college football players have been paid for a long time.

“NIL has been going on for a long time,” Fisher said. “It just hasn’t been above board. Now it is, and I think it does affect things. Because other people don’t have the advantages they used to have and how they did things and the way they did things.”

Jimbo Fisher is just saying what we already knew— that players have received money in return for their play, illegally, under the table, for years.

This was no secret, but Fisher is one of, if not the first head coach to come out and say it on the record like he did.