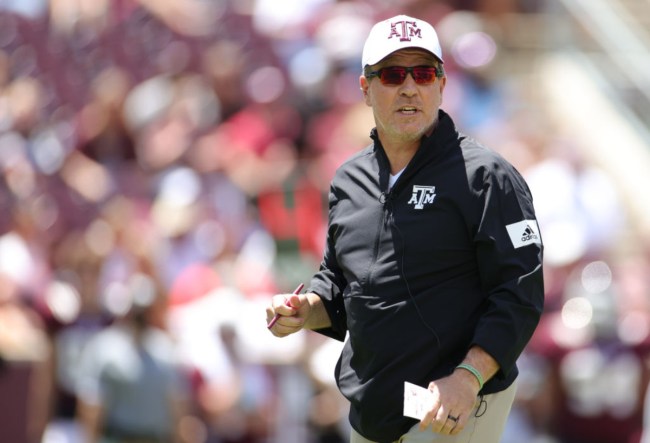 The Texas A&M – Alabama game on October 8 this year in Tuscaloosa could be the most highly anticipated college football matchup in a decade. It’s not because both teams are expected to be special this upcoming season, although that helps, it’s due to the fact that Jimbo Fisher and Nick Saban have started a war between the two programs.

It all started on Wednesday night when Saban went on a fiery, seven-minute-long rant about NIL. The Alabama head coach first called out Jackson State for paying “a guy a million dollars last year” in reference to Travis Hunter signing with the Deion Sanders’ team.

Then came the shots at Texas A&M.

Saban also went on to talk about how Alabama will not be partaking in the bidding wars. He was adamant that the Tide would not be getting involved with “buying recruits.”

Yep, he actually said it.

It didn’t take long for Fisher to respond to Saban’s accusations. The Aggies’ head coach called a press conference on Thursday morning and did not hold back in his response to Saban.

“It’s a shame that we have to do this, it’s really despicable,” Fisher began. “It’s despicable that somebody can say things about somebody, more importantly, 17-year-old kids. You’re taking shots at 17-year-old kids and their families.”

“We never bought anybody, no rules were broken, nothing was done wrong. The way we do things, the ethics of the way we do things, and these families, it’s despicable that a reputable head coach can come out and say this when he doesn’t get his way.”

“The narcissist in him doesn’t allow those things to happen, and it’s ridiculous when he’s not on top. The parody he’s talking about in college football, go talk to coaches who coached for him, you’ll find out all the parody. Go dig into wherever he’s been, you can find out anything.”

Jimbo is NOT holding back 😳 pic.twitter.com/NnOXXSnRAy

The drama in college football has never been higher, and we’re here for it.