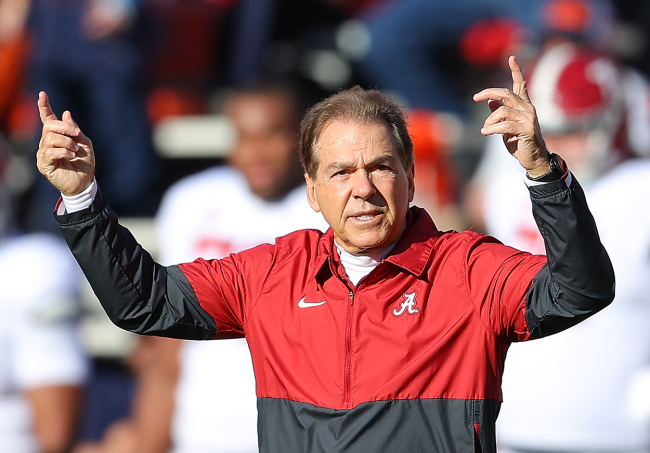 Nick Saban is not a fan of the current climate within college football in relation to Name, Image and Likeness. Where the legalization of NIL was supposed to be used as a way for college athletes to profit off of their person, it has quickly become a prominent factor in recruiting.

On Wednesday night, the head football coach of Alabama went on a lengthy, fiery, almost seven-minute rant about NIL and how it is being used around the country. In doing so, he called out Texas A&M, Jackson State and Miami.

High school football players have always been paid under the table in exchange for their commitment, at least within the last four+ decades. Jimbo Fisher even said so himself.

However, with NIL, things are being done above the table— kind of. While pay-for-play remains illegal, there are legal workarounds that give college football boosters associated with a specific school the leeway to offer large amounts of money to recruits.

High school recruits are signing six-figure deals on the regular and one Class of 2023 five-star signed a deal worth $8 million. That doesn’t include the underground transfer market in which top-level players are being enticed to leave their current programs with large deals for their NIL.

That’s where Jordan Addison and the timing of Nick Saban’s rant on NIL comes into play.

Earlier this month, reigning Biletnikoff winner Jordan Addison was reportedly set to transfer from Pittsburgh to USC. Upon arrival in Los Angeles, he was said to receive a large NIL package.

Considering that Addison had turned down a high six-figure offer from an SEC East program already, the NIL deal was going to be massive. That could very well still be the case, but there is an added twist.

Addison’s recruitment has become something of a bidding war.

After the Pittsburgh wide receiver officially entered the transfer portal, he was believed to be considering Alabama, Texas and USC. He has since visited Austin and got the red carpet treatment. While there, he received an interesting new Instagram follower who has been tied to NIL deals for other Longhorn stars.

Addison has also visited USC. Since his trip out West, the rising junior has cut Alabama from his list without a visit.

Pitt transfer and Biletnikoff winner Jordan Addison has narrowed his two choices down to Texas and USC — with a decision expected soon — per sources.

In Saban’s rant on Tuesday, he spoke about how Alabama will not be partaking in the bidding wars. He was adamant that the Crimson Tide would not be getting involved with “buying recruits” or, in this case, transfers.

The timing of things is very interesting. Reports have already indicated how much USC’s boosters might be willing to offer Addison. Texas is believed to be in the mix because its boosters are in the same ballpark in terms of compensation.

Alabama didn’t even get a look from Addison.

Perhaps it is because Saban refuses to play the new NIL game? Maybe the Crimson Tide boosters told Addison that they could not offer him the same compensation package as the Longhorns or Trojans?

Regardless of what it was that really set Saban off, it seems like the reports about Addison’s NIL desires has correlation to the rant.

Alabama is not paying top dollar, according to Saban. Addison did not give legitimate consideration to Alabama.

The timing of Saban’s rant in conjunction with Addison’s recruitment is certainly intriguing. Addison’s final two may not have been what set Saban into a tizzy. That is likely a combination of factors. He has been frustrated with NIL for quite some time.

However, the rant could provide an illuminating answer to why the Crimson Tide did not make the cut for Addison. Maybe they simply weren’t interested in Addison and chose to move on. Maybe they didn’t want to play the NIL game.