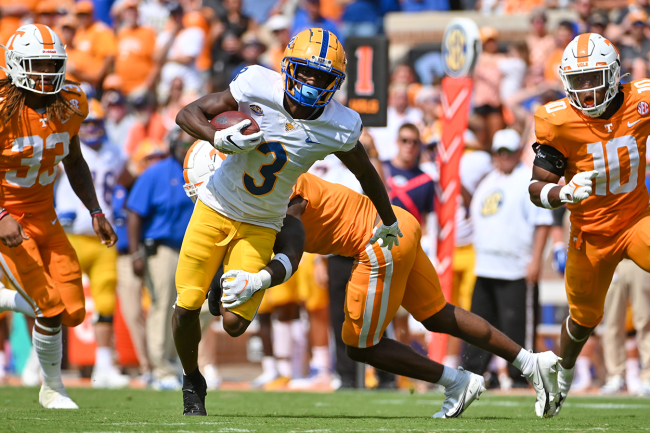 Jordan Addison is the nation’s top wide receiver from a year ago. After spending his first two years at Pittsburgh, he is set to transfer.

Where will he end up? That’s the question of the hour.

Initially, reports indicated that Addison was headed to USC on a massive deal for his Name, Image and Likeness. That set off a huge chain reaction that included multiple phone calls to Lincoln Riley from the head coach at Pittsburgh.

A few days later, Addison’s name officially hit the portal. Although he has said that a return to Pitt is possible, it appears as though the Panthers’ staff understands that it is not.

Since entering the portal, Addison’s list of suitors has grown to become rather lengthy. However, it seems as though Texas, Alabama and USC are the three frontrunners.

Addison was in Southern California working out with Crimson Tide quarterback Bryce Young last week, Trojans quarterback Caleb Williams infuriated college football fans by directly recruiting Addison on Twitter, and Longhorns running back Bijan Robinson has since done the same on Instagram after hanging out with Matthew McConaughey. Meanwhile, the reigning Biletnikoff Award winner was on campus at Texas this week.

During Addison’s visit to Austin, the Longhorns staff rolled out the red carpet. Understandably so.

Upon arrival, Addison was met with his own personal greeting and a jersey swap. And then they made the jersey swap into reality during the visit photoshoot, which provided the first look at Addison in a Texas uniform.

Wherever Jordan Addison ends up, Name, Image and Likeness is expected to play a role.

Prior to Addison entering the portal, he is said to have turned down a high six-figure offer from an SEC East program. And then the report surfaced about his potential transfer to USC and the money that would be attached if he chose the Trojans.

While he was on campus in Austin, there was another interesting development. Addison’s newest Instagram follower hints at his massive NIL potential at Texas.

There is no timeline for Addison to commit. After entering the transfer portal by the May 1st deadline, he will be eligible for the fall at whatever school he chooses. More than likely, he will decide before the summer. That would allow him to get on campus and get settled prior to fall camp.