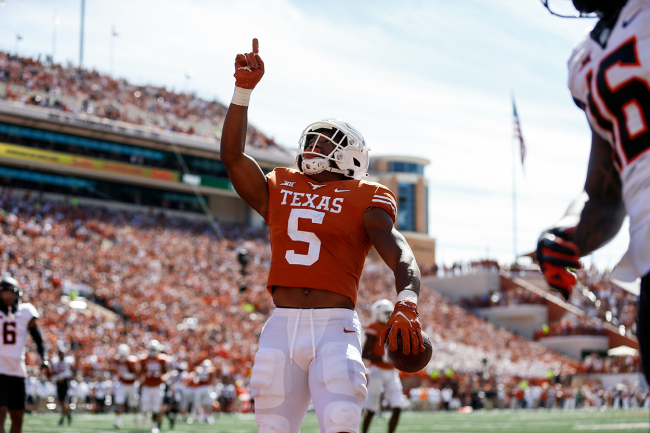 Texas running back Bijan Robinson is set to be a crucial, if not the biggest part of the Longhorns’ offense in 2022. The senior ball-carrier is coming off of a 1,127-yard season in 2021 and hopes to continue to build his NFL Draft stock this fall.

However, as big of a role that Robinson is set to play, he is actively trying to get more playmakers around him. Specifically, the former five-star recruit wants Jordan Addison to join him and the Longhorns in Austin.

Addison, the reigning Biletnikoff Award winner, entered the transfer portal earlier this month. Initial reports said that the former Pittsburgh receiver was going to transfer to USC on a massive NIL deal.

While that could very well still be the case, Addison’s lengthy list of suitors has grown beyond the Trojans. He was in Austin on Tuesday for a campus visit with the Longhorns. Details of his visit are unclear, but he did get a questionable meal for lunch.

As Addison toured Texas, his potential offensive counterpart was living it up.

Bijan Robinson posted a video from a beautiful home in the Texas hills alongside Matthew McConaughey.

McConaughey, of course, has deep ties to UT, but why he was straight chilling with Robinson is unclear. Was Addison with them? It’s a possibility, but nobody knows. Pretty cool either way.

Shortly after posting about his afternoon with the Oscar-winner, Robinson turned his attention back to Addison. After making a pitch for the receiver to come play in Austin on Twitter earlier in the week, he posted a cryptic Instagram story directed toward Addison on Tuesday.

Bijan Robinson has been hard at work recruiting this week, latest via his IG Bijan_Robinson 👀 #HookEm | @Horns247 pic.twitter.com/xOWmDVsVq0

Wherever Addison ends up, he is going to be a monster. Whether he catches passes from Caleb Williams at USC, Quinn Ewers at Texas or Bryce Young at Alabama, he is going to live in the nightmares of defensive backs.

Robinson hopes that Addison will come hang out with him and McConaughey.