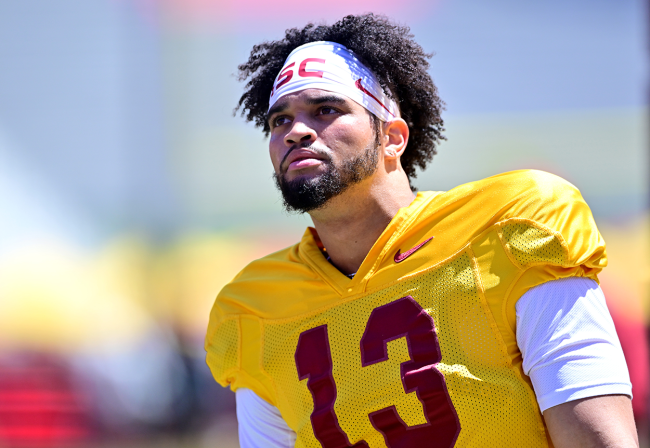 The best wide receiver in college football is a free agent. Kind of.

Pittsburgh pass-catcher Jordan Addison, who won the Biletnikoff Award in 2021, entered the transfer portal earlier this week. Now his recruitment is reportedly set to become an expensive bidding war.

Initially, before he officially showed up in the transfer portal, reports surfaced about Addison’s future with the Panthers. He was set to enter the portal and transfer to play for Lincoln Riley at USC. Upon enrollment, Addison was going to receive a lucrative deal for his Name, Image and Likeness.

That could very well still be the case. And, considering that he declined high six figures from an SEC program, his NIL package is likely going to be at or north of a million dollars.

However, since Addison officially entered the portal, a new set of suitors have entered the conversation. The rising junior receiver is currently in southern California working out with a recent Heisman Trophy winner, which has drawn quite a bit speculation.

In addition, it appears as though a return to Pittsburgh has been completely ruled out. That means that Addison is going to have a new team in 2022.

As Jordan Addison’s decision looms, he is being recruited by Trojans starting quarterback Caleb Williams.

On Friday afternoon, Fox Sports posed the question of where Addison should play next season. Williams was quick to make his pitch.

This, of course, drew quite a bit of scrutiny.

Many people, particularly those in Norman, believe that the Trojans tampered with Williams and wide receiver Mario Williams as they decided to follow Lincoln Riley and transfer from Oklahoma to USC. Many people believe that they are currently tampering with Addison.

Williams’ tweet did not help to calm those beliefs. People, particularly those in Norman, are fuming.

This is a joke right? College football has become an absolute clown show https://t.co/qlF9Iefqlr

Wherever Addison ends up, he is going to be an immediate game-changer on offense. If he does end up at USC, there will be a lot of angry folks out there.