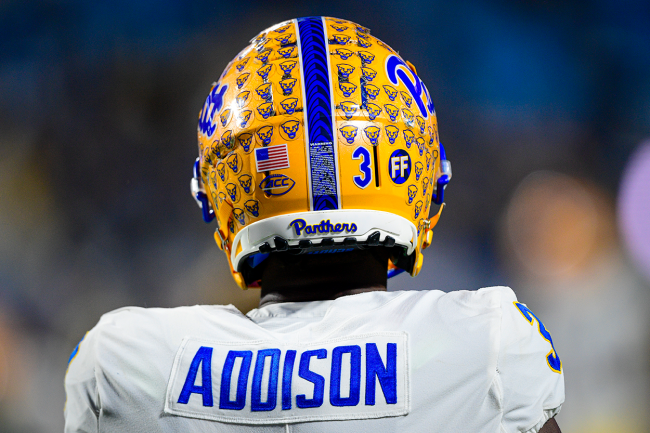 The 2021 Biletnikoff Award winner is officially a free agent.

Jordan Addison, who had 100 catches, 1,593 yards and 17 TDs for Pittsburgh last year, is now officially in the transfer portal, @on3sports has learned.https://t.co/xWsWSZF8sP

Four days after the move was first reported as taking place, the best wide receiver in college football is exploring his options with another program for his final two years of collegiate eligibility. Pitt head coach Pat Narduzzi saw it coming all along.

Now that Addison is officially in the portal, the expectation is that an expensive bidding war is set to unfold. Initially, USC was considered to be where he will end up.

On Friday night, reports began to surface that Addison was going to join the Trojans in 2022 and was set to get paid a small fortune through NIL once he enrolled. In addition, the Maryland-native has ties to USC quarterback Caleb Williams, who also grew up in the DMV area.

That could very well still be the case. There is a good chance that Addison ends up playing in cardinal and gold next season.

However, after his name appeared in the transfer portal, a new set of suitors emerged for Addison’s commitment. According to Chris Hummer of 247Sports, Texas, Alabama, Georgia and Miami will also be in the mix, among USC and others.

Wherever Addison ends up, it will likely be costly. He reportedly turned down six figures from an SEC program at the end of 2021, so his going rate is believed to be in the seven-figure range. Stay tuned.