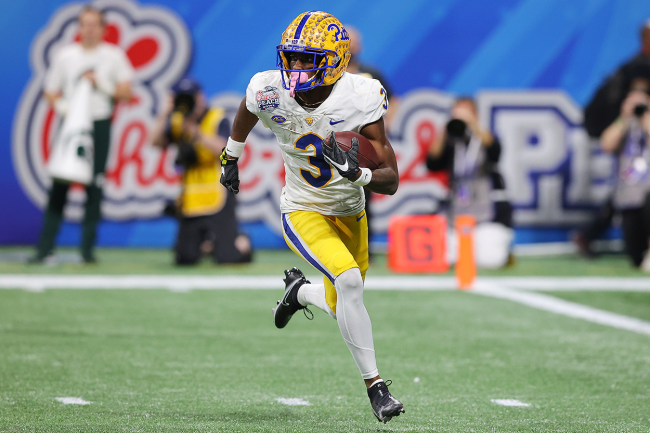 The 2021 Biletnikoff Award winner is officially a free agent.

Jordan Addison, who had 100 catches, 1,593 yards and 17 TDs for Pittsburgh last year, is now officially in the transfer portal, @on3sports has learned.https://t.co/xWsWSZF8sP

Addison’s decision is not unexpected. Late last week, reports began to surface about the prospect of him leaving.

More specifically, the understanding was that Addison was set to transfer to USC. Not only does he have ties to quarterback Caleb Williams after they both grew up in the DMV area, but NIL was reportedly a huge factor.

Per multiple reports, the Trojans’ boosters were set to pay him a large sum of money through NIL deals upon his enrollment in Los Angeles. While there have been some muddying of the waters by schools like Alabama and Texas, and although a return to Pittsburgh is not out of the equation, the expectation remains that Addison will suit up in cardinal and gold next fall.

No matter where he ends up, Pitt head coach Pat Narduzzi saw it coming. He called it a few months back on an appearance with SiriusXM radio.

While discussing NIL and the transfer portal, Pittsburgh head football coach Narduzzi had the following to say about Jordan Addison:

“I think they work hand in hand. You know, the tampering where, you know, you should not have to recruit your own team,” he said. “Nobody should be able to come in and say, ‘Hey, listen, we like that Biletnikoff (winner), that No. 3, that Jordan Addison, he’s pretty good. We think we want him to come down south and we’re gonna give you, you know, $500,000 to come down south and you’re gonna be driving a, you know, a BMW.’”

Although Narduzzi got the region of the country wrong, and his monetary number might actually be too low, he saw it coming. He saw the writing on the wall.

Perhaps Narduzzi knew that Addison had already declined a lucrative NIL deal at Kentucky when he was talking about the prospect of his star receiver transferring. Perhaps he didn’t.

Either way, he was almost perfectly spot-on with what was to come. Here are his full comments: