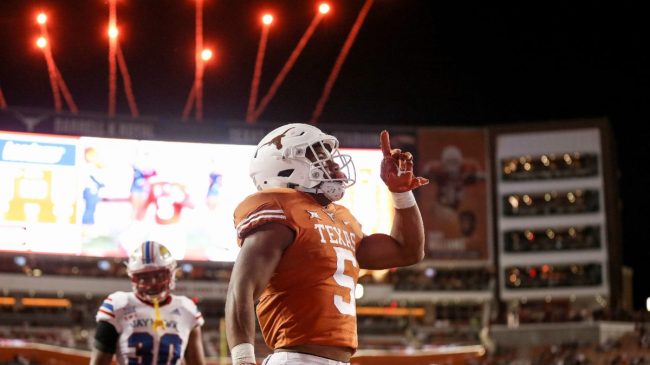 Texas running back Bijan Robinson might have the most impressive list of NIL agreements in the country.

The star rusher inked a deal with luxury car dealer Lamborghini on Thursday, adding to a laundry list of signings that the future NFL pick is in on.

Those partnerships include companies like Raisin’ Canes, Centre, and C4 Energy, as well as mega-deals with the likes of sports media leader DAZN and social media outlet Cameo.

The deal sent shockwaves through the football world, giving players yet another reason to come play their ball at Texas. Robinson projects to be one of the top running backs taken in the 2023 NFL Draft, and his announcement with Lamborghini had a number of professional players talking.

There were a couple of current NFLers to take note of the deal with Lamborghini, with many now wishing that NIL was around during their college playing days.

You come to Texas and play GREAT the opportunities endless! @TexasFootball 🤘🏾 https://t.co/JCrYpbXPay

Former Texas star Quandre Diggs weighed in by saying, “You come to Texas and play GREAT the opportunities endless!!”

“Lord Jesus the kids gettin to the bag.”

This deal is huge for both Robinson and the Texas football program. The Longhorns are hoping to get back into the national conversation, having struggled through the last decade.

Robinson should be one of the team’s top performers in 2022, and it could help the program recruit at a higher level in the coming years.