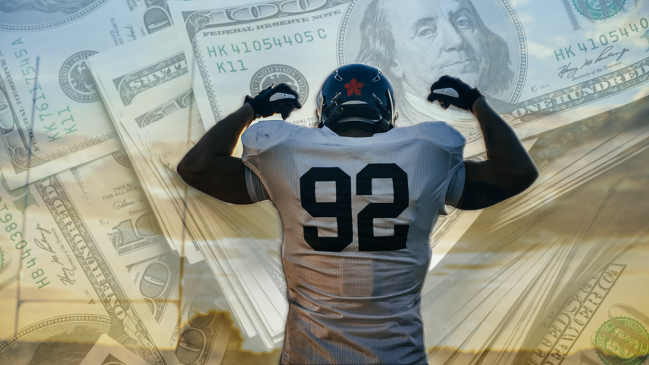 Name, Image and Likeness has changed the entire landscape of college football. Although money has always been a factor in recruiting, the sticker price for top prospects is skyrocketing in the new era.

A five-star recruit, that is presumably one of three quarterbacks, recently signed a deal that could be worth up to $8 million. That set the precedent.

Since then, there have been countless recruits all over the country that have inked NIL deals with a collective that is associated with a specific college program. While pay-for-play remains a violation of NCAA rules, the contracts utilize unique loopholes that are largely based on trust to keep things legal.

In a recent report from The Athletic’s Stewart Mandel, David Ubben and Max Olsen, some of the money that is being thrown around is made public and put into perspective. There is a lot of dough involved.

Class of 2023 college football recruits, who are currently juniors in high school, are getting paid through NIL.

Although the signees and schools involved remain anonymous, the price tag is all that you need to know. These are 17-year-olds signing these deals and there are all kinds of ramifications.

Three-star prospects will see the $500,000 number and expect equal or greater opportunities. Top four-star recruits who believe they are as good or better than the rest of their class are going to scoff at the $1 million number. Five-star recruits aren’t going to settle for less than seven figures.

And yet, there is no way of knowing whether these recruits will be worth the investment. They could get to campus and spend all four years as the third-string, but their contracts may not be contingent on playing time, so they might get paid anyway.

Now, it’s ignorant to pretend that money wasn’t always involved in recruiting. It has always been a factor.

I mean a player testified to the NCAA in a hearing a few years that he accepted money from 3 different SEC west schools.

However, despite the false narrative that Jimbo Fisher may try to weave, money is playing a role in recruiting now more than ever. Multiple coaches around the country have spoken out about what NIL is doing to the landscape of the sport and Lane Kiffin even took a direct shot at Tennessee for how much it may have paid a quarterback.

Money has always been linked with recruiting, but Name, Image and Likeness makes the transactions legal and much more public. To pay $500,000 for a three-star recruit is pretty wild.