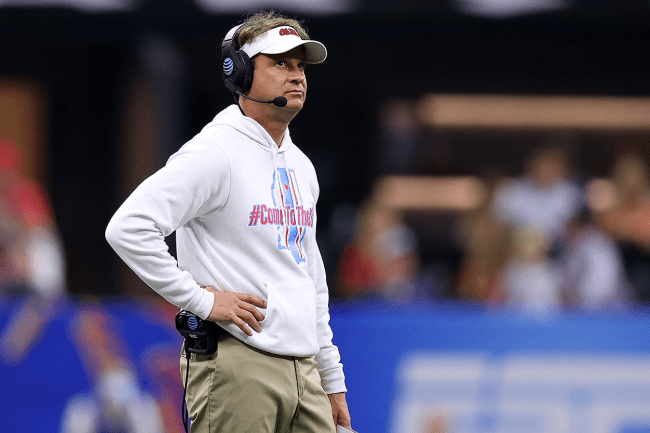 Lane Kiffin is one of the few coaches who are willing to call it how it is. After years of coaching on both the collegiate and NFL levels, at schools far and wide, the head football coach at Ole Miss is not afraid to speak his mind— particularly in regard to Name, Image and Likeness.

As other coaches, like Jimbo Fisher, continue to dance around the current climate of recruiting and continue to spin a false narrative about money, Kiffin is not. The 46-year-old has been extremely vocal about the door that NIL has opened and the direct effect it has on where players want to go to school.

Now he is taking aim at Tennessee, a school with whom he has a longstanding beef after coaching the Volunteers for one season before leaving for USC. Upon his first return to Knoxville as an opposing head coach last fall, the Rebels not only one the game, but Kiffin had trash, mustard and even a golf ball thrown in his direction on the sidelines.

Since (and even before) then, he has taken every opportunity to troll Tennessee. Now he is coming directly for their head by raising legitimate questions about NIL.

Lane Kiffin did not hold back while discussing Nico Iamaleava’s commitment to Tennessee and the role that NIL likely played in the decision.

Earlier this spring, a report came to light about a high school senior who signed an NIL deal that will be worth up to $8 million. The recruit is a five-star prospect in the Class of 2023 and based on logical deduction, only a few names make sense.

The NIL deal has a lot of technical jargon that keeps it from violating the NCAA’s rules on Pay-For-Play, so it is legal. However, it is hard to imagine that the money did not have something to do with the player’s decision on where to go to school.

In a recent appearance on The Rich Eisen show, Kiffin spoke more about how NIL has changed the landscape of college football. He said, again, that it has created something of free agency amongst transfers and recruits.

He also used Tennessee and its alleged $8 million man as an example for the issues that NIL has created.

“You’re going to have all these locker room dynamics, you’ve got a player coming into school over there in East Tennessee for $8 million who hasn’t played a down,” Kiffin said. “You’ve got a locker room saying, wait, what if the guy doesn’t play, how’s that going to work? How’s the donor going to feel that paid all that money when the guy’s not playing. You’ve got a lot of things that haven’t been figured out at all.”

It is pretty clear who Kiffin is talking about because he wasn’t subtle at all. Whether it is Iamaleava who signed the deal or not, the Ole Miss coach is amongst the many (if not majority) who believe that the Volunteers collectives opened the bank to lure the five-star quarterback to Knoxville and he is not wrong about the questions that NIL and this specific, unnamed, $8 million deal have raised.