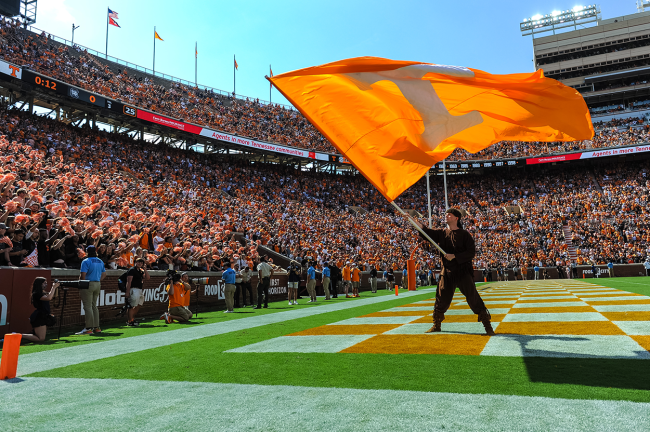 In the modern climate of college football recruiting, image is not the only thing, but one of the most important things. As a result, there is an ongoing arms race around the country to one-up other programs in terms of video and media content.

While some coaches, like Brian Kelly and Dabo Swinney are failing tremendously at keeping up with the social media era of recruiting, coaches like Lane Kiffin and Josh Heupel are not. In fact, the latter stepped up his and the Volunteers’ game over the weekend— but it doesn’t quite compare to the former, yet.

Five-star quarterback Nico Iamaleava was in Knoxville for a visit and took one of the hardest recruiting photos out there. With Heupel in the driver’s seat and offensive assistants on either side of the whip, Iamaleava posed out of the sunroof of a Mercedes G-Wagon.

Josh Heupel is going ALL OUT to land 5-star QB Nico Iamaleava🤯 pic.twitter.com/wlrfxYPJlY

Taken outside of Neyland Stadium in front of the national championship sign, the result was awesome. Iamaleava wore the black on black uniforms with a Vols beanie and shades, while the white helmet sat on the hood.

Here is how the final picture turned out, it goes crazy:

HOWEVER— there are two important details of note here:

Does Heupel own his G-Wagon? Is that what he is driving on a day-to-day basis?

If so, the picture with Iamaleava is straight flames. If not, it’s cool, but not quite as cool as Kiffin.

2) When Kiffin took the photos in his Aston Martin and Porsche, he landed all of the eligible recruits.

If Iamaleava commits to Tennessee, which it seems like he might, the G-Wagon photo should be hung on the wall next to Heupel’s desk. It’s amazing.

If he Iamaleava doesn’t commit, then the photo will go down as an epic fail— almost as bad as Kelly grinding on a recruit and then having him commit to Alabama. Almost.

For now, the G-Wagon picture is incredibly awesome. Only time will tell if it goes down on the right or wrong side of history.