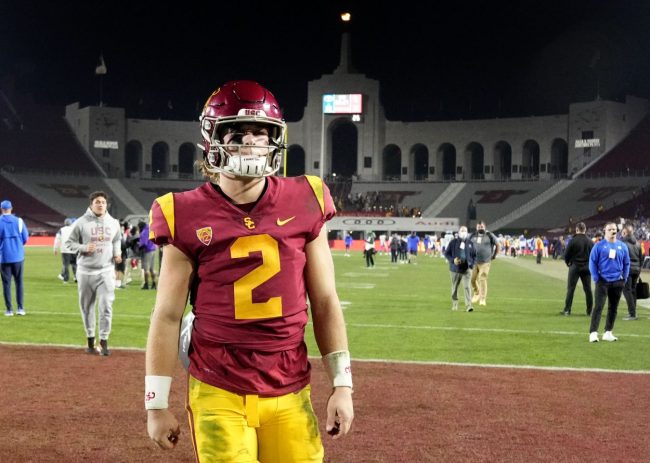 Former USC quarterback Jaxson Dart and tight end Michael Trigg are currently in Oxford, Mississippi. The former Trojans are visiting Ole Miss on a recruiting trip after entering the transfer portal last week and getting the full experience.

While in town, neither of them have a car, obviously. The dangerous duo and former roommates in Los Angeles flew to the ‘Sip on Thursday after visiting Oklahoma earlier in the week.

To help get them around town, head coach Lane Kiffin generously offered them a ride. He has two cars— a Porsche, and an Aston Martin.

Earlier this year, Kiffin took some photos with a few recruits in his Porsche. It was truly iconic.

This time, he flipped the script. He, Dart and Trigg took photos with his Aston Martin and they were icy cold— literally. Oxford got a few inches of snow on Saturday night into Sunday, which made the shoot go that much harder.

Trigg and Dart’s recruitment is down to the Sooners and the Rebels, but Oklahoma doesn’t really make any sense for either of them and Ole Miss offers the opportunity to play in the SEC right away. In addition, after the duo visited Norman, Trigg posted a video from the trip and Dart did not.

This time, Dart was the first to post the photo. Get your eyeball emojis ready.