Former USC QB Jaxson Dart’s Recruitment Down To Two Schools, But One Of Them Doesn’t Make Sense 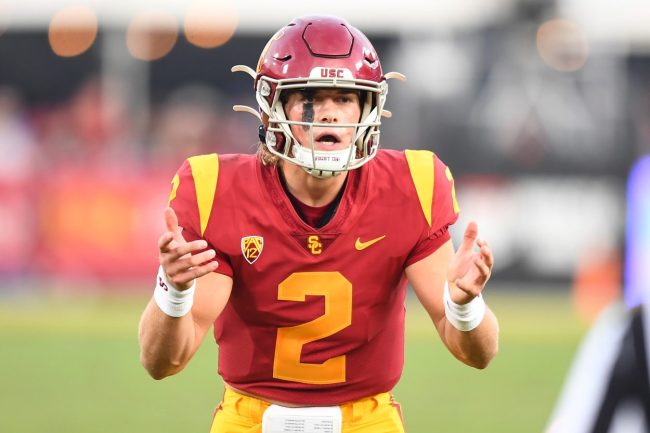 Meanwhile, Dart’s future is reportedly down to two schools.

Per multiple reports, Dart is deciding between Oklahoma, TCU, LSU and Ole Miss. However, the Tigers and Horned Frogs are backing off their recruitment, leaving the Sooners and the Rebels as the top-two suitors.

In addition to Dart, wherever he goes, it appears as though his former tight end is to follow. Michael Trigg, a former four-star recruit who made one of the most vicious plays that you will ever see at USC last season, is also in the portal and the two are considered a package deal.

Both he and Dart are deciding between Oklahoma and Ole Miss. The two were on campus in Norman earlier this week and Trigg posted an extremely lit video from their visit.

Not long after making the trip to Oklahoma, the two are currently in Mississippi.

As of right now, neither of them are scheduled to visit LSU or TCU.

However, both of their fits at Oklahoma are unclear.

For starters, the Sooners’ new offensive coordinator Jeff Lebby does not really use the tight end. That does not bode well for Trigg.

As a result, if it was up to Trigg’s father, he would not be going to Oklahoma. In addition, the coach who recruited Trigg to USC is now serving in the same role at Ole Miss.

But ultimately, it appears, it is largely up to Dart.

His fit at Oklahoma also does not make very much sense. Earlier this offseason, the Sooners signed transfer portal quarterback Dillon Gabriel, who led the nation in passing under Lebby at UCF a few years ago.

He is expected to be the starter in Norman next season.

So where does that leave Dart? Well, the team is asking him to redshirt in 2022. Hm.

Could he go in, dominate Gabriel in camp and force the staff to change its mind? Sure. Is it likely? Not really.

Thus, to play for Oklahoma, it would almost certainly require Dart to go from the starting quarterback at a Power 5 conference school to a clipboard holder for the Sooners. That seems like quite the downgrade, but crazier things have happened.

Wherever he ends up, either the Sooners or Rebels are getting one heck of a ball player.