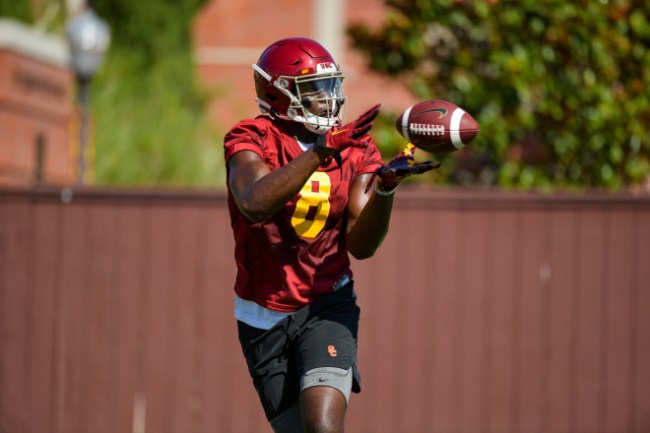 University of Southern California football is poised for a big year and it looks like a true freshman could play a big part in the return of the Trojans. Tight end Michael Trigg is going to live in the nightmares of opposing Pac-12 defenders.

At 6-foot-4, 245-pounds, he is hard to miss. The Florida-native chose USC over LSU and South Carolina and will play both football and basketball in Los Angeles.

Trigg’s future, however, is on the gridiron and it’s easy to see why. He made one of the most dominant, freak-of-nature plays that you will see all year during a team scrimmage on Wednesday.

Look at this play and try to imagine anyone in the country successfully tackling this behemoth of a human. Trigg looks like he’s playing against Pop Warner defenders, when in reality, he’s facing the No. 40-ranked defense in the country from a year ago.

Trigg was the No. 3 tight end recruit in the 2021 class, but he carried a four-star ranking and offers from Alabama, Auburn, Florida, Georgia, Ohio State, North Carolina, Penn State, Tennessee, Virginia Tech and West Virginia, among others.

Although offensive coordinator Graham Harrell’s offense hasn’t utilized the tight end position in recent years, that will change in 2021. Trigg is too big, fast and physical not to target in a system that throws the ball 80 percent of the time.

Freshman QB Miller Moss to freshman TE Michael Trigg in one-on-ones today. This is a good example of how Trigg is going to be hard to defend once he settles in at #USC. pic.twitter.com/WLvS9B4lWH

The Trojans are ranked No. 15 in the AP Poll and will compete with the Oregon Ducks for the Pac-12 title if rankings remain.