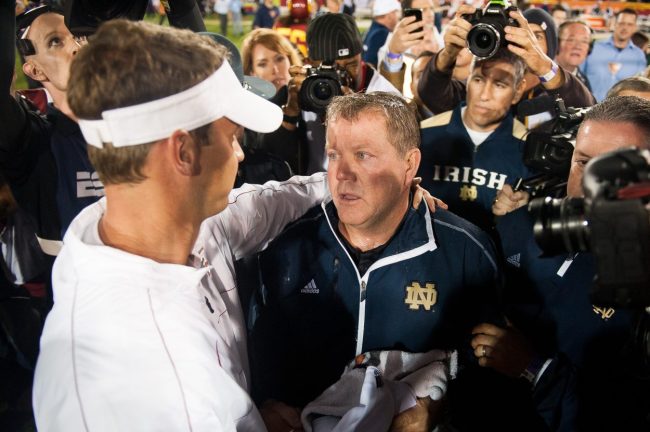 Lane Kiffin has experience with Brian Kelly from his days at Notre Dame, but now the two are in the same conference. Kiffin, at Ole Miss, will face Kelly, at LSU, once a year until either one of them moves on from their respective programs.

Although Kelly has only been with the Tigers since November, the rivalry is already off to a hot start.

On Friday night, a video began to circulate from one of LSU’s recent recruiting visits. Three-star tight end Danny Lewis, from New Iberia, Louisiana, is a prospect that Kelly and his staff hopes to keep in-state.

As a part of his visit, Lewis stepped into the program’s 360-degree video booth with his potential future head coach. Yes, the same one in which Kelly celebrated landing a five-star quarterback by awkwardly dancing to Garth Brooks.

In the video, Kelly is standing behind Lewis on a small podium. Set to ‘Right Foot Creep’ by NBA Youngboy, they are both dancing, but Kelly essentially grinds on his recruit. It’s very, very uncomfortable and went very, very viral.

Meanwhile, Kiffin was having dinner with Nelson Agholor in Tampa.

When the Kelly video starting making its rounds, Kiffin had to chime in and chirp his divisional rival. He did not hold back, commenting on how cringeworthy Kelly’s video is and tagging him directly.

Did you lose a bet or something @CoachBrianKelly ?? This can’t be real. Photoshopped? Account hacked?? I mean …. https://t.co/HvhOo2AcIZ

Kiffin shook his head at Kelly’s first commitment dancing video and now he truly can’t believe that Kelly not only did it again, but did it so much worse. Meanwhile, the head coach of Ole Miss is whipping recruits around in his Porsche and taking icy photos with big-time transfers next to his Aston Martin. Could not be him.

The SEC West is going to be chippy for the years to come with Kiffin and Kelly in the south. Buckle up!