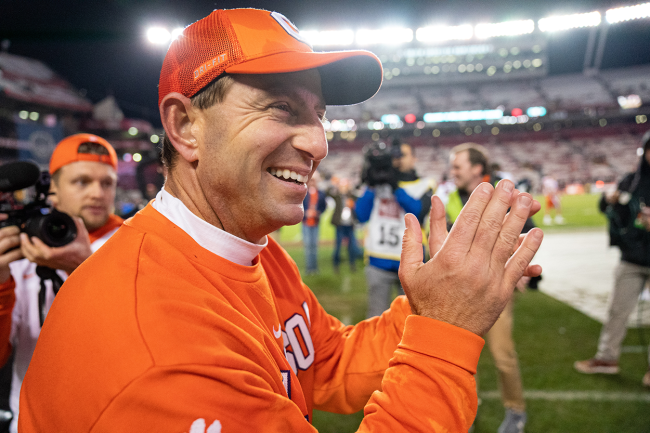 College football coaches are taking things one step too far in recruiting recently. A photo of Dabo Swinney sitting on a senior in high school’s lap has made its way across the internet and it’s as strange as it sounds.

Earlier this year, new LSU head coach Brian Kelly viral for all of the wrong reasons. At first, he did a weird dance to Garth Brooks with his five-star quarterback commit. And then, right before National Signing Day, he was seen grinding on a recruit who ultimately committed to Alabama.

Recruiting has changed drastically in the social media era, but there is a line and Kelly crossed it. It was weird.

But he is not alone.

Around the same time, Clemson shifted its focus at the quarterback position. Arch Manning reportedly told the Tigers that he will not be playing his college ball in South Carolina, which caused the staff to pivot toward their next-best option.

Christopher Vizzina is a four-star prospect in the Class of 2023 and has offers from more than 20 schools, including Clemson. Swinney and his staff badly want him to commit to play in purple and orange and the interest is mutual, at least to some extent.

Vizzina visited the school over the last weekend in January and seemed to have a good time.

However, while there, Swinney made things weird. In one of Vizzina’s photos, the Clemson head coach sat on his lap as if it was a child visiting Santa Claus at the mall.

That is not okay, Dabo. It is weird.