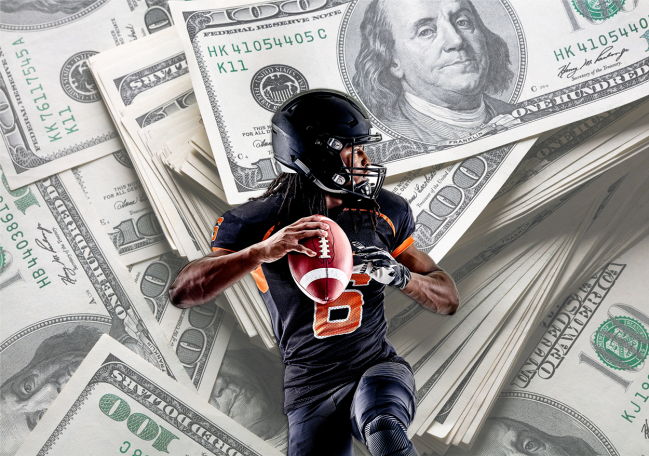 Name, Image and Likeness has changed college sports, particularly college football, forever. When the NCAA implemented its interim rules on NIL in July of 2021, recruiting immediately became an arms race to secure the most funding through boosters and collectives.

In the past, illegal financial and pay-for-play deals took place under the table. When schools were caught committing violations, like the infamous Pony Express, USC and Reggie Bush, or Ole Miss football during the Hugh Freeze era, they were punished. Even Jimbo Fisher admitted that college football players were paid illegally in the past.

Now, with NIL, there is an above-ground way of paying high school recruits and players already on college football rosters. Although a recruit cannot accept financial compensation in exchange for his commitment, there are legal ways to float monetary agreements for recruits who commit to a specific program.

It’s more of a vague workaround than a clearly-defined set of rules. Either way, money plays a role in recruiting in 2022, despite what Fisher tries to claim about Texas A&M landing the highest-rated recruiting class of all-time as the price of oil skyrockets.

On Friday night, the entire landscape of NIL and recruiting was flipped on its head.

There were big numbers coming in around the country in terms of NIL. Some current college athletes, like Bryce Young and Quinn Ewers, have deals that are worth more than $1 million.

However, on Friday, what is believed to be the largest NIL agreement of all-time was made public. A junior in high school inked a deal that could be worth more than $8 million.

Neither the recruit nor the school was named in the report, but with some logical deduction, the list of prospects who may have signed the deal is likely down to three. With that being said, it is all speculation at this point. These are educated guesses.

For starters, to be worth $8 million, one would assume that he must be the face of the program. That would, in the vast majority of situations, be a quarterback.

It is also known that the recruit is part of the upcoming Class of 2023.

If, and it’s definitely an if, the wealthy recruit is a quarterback in the Class of 2023, three big names stand out. There are three quarterbacks ranked as the top three recruits in their class.

Let’s look at the possibilities:

One potential option is Nico Iamaleava. He is a five-star prospect ranked third in the class. The 6-foot-5, 195-pound dual-threat quarterback recently visited Tennessee and is trending toward a commitment to play for the Volunteers in Knoxville. Iamaleava is also linked to Oregon, Georgia, Miami and UCLA, among others.

Perhaps $8 million is what put him over the top for Tennessee?

Another potential option is Malachai Nelson. He is a five-star prospect ranked second in the class and is committed to USC. At 6-foot-3, 180 pounds, the California-native was originally committed to Oklahoma but flipped when Lincoln Riley took over the Trojans.

Maybe $8 million is an investment into the mindset that USC is back to being a national championship contender right away?

The third option is Arch Manning. The grandson of the first family of football is the top-ranked recruit in his class and is the biggest-name recruit since, well, his uncles Eli and Peyton. There has been some chatter about Texas in recent weeks, but the 6-foot-4, 215-pound gunslinger is also considering Georgia, Ole Miss, Alabama, LSU and Florida.

Manning’s recruitment is not considered to be anywhere near over, and his father Cooper has made it very clear that they are doing things the “old-school way” with NIL not playing as big of a role as it might for others. But wouldn’t it make sense for such a massive deal to go to such a massive name?

Should the deal not be for a quarterback, a few other names might make sense.

David Hicks is a five-star defensive tackle committed to Texas A&M. The Aggies reportedly spent a lot of money on its Class of 2022, and the price of oil is up even more than it was just a few months ago. There is always the chance that A&M boosters and collectives are shelling out even bigger numbers in 2023.

Five-star recruit Cormani McClain could also be a possibility. He is committed to Alabama, and the state just repealed its previously-established legislation for NIL which could allow the Crimson Tide collectives to offer bigger deals than before.

Beyond those five, it is hard to imagine an $8 million deal being given to a recruit with a name that is not at least considered a “household name” in the recruiting world.

Five-star offensive tackle Kadyn Proctor is an uncommitted Iowa-lean, but would the Hawkeyes spend a small fortune on a lineman? The same question can be asked of five-star EDGE rusher Keon Keeley, who is committed to Notre Dame.

From there, the remaining five-star recruits according to On3 Sports are as follow:

Those seem to be the possible recruits who signed the most lucrative NIL deal of all-time. There’s no way that a four-star is getting an NIL deal for $8 million, right? RIGHT?!