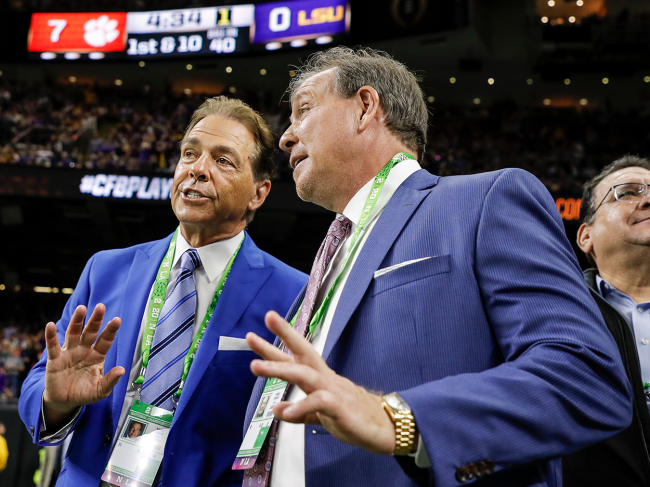 Jimbo Fisher once coached under Nick Saban at LSU. Now the two are sworn enemies.

They coaching against each other in the SEC West, and they are in the middle of a vicious spat. As a result of their skirmish, they have both been issued a completely irrelevant punishment by the Southeastern Conference.

On Wednesday night, Saban was asked about the current state of NIL and burnt everything to the ground. He went on a nearly seven-minute rant about recruiting and proceeded to drag Texas A&M, Miami and Jackson State under the bus.

Saban claimed that the Aggies “bought” every one of its Class of 2022 football commits. He also said that Deion Sanders paid $1 million for a top player, and called out Hurricanes booster John Ruiz. Since then, Travis Hunter Jr. clapped back at Saban with one simple tweet and Jimbo Fisher called an impromptu press conference to discuss the comments.

During the media session, Fisher did not hold back. He made a lot of very aggressive, forward implications about Saban’s recruiting practices and went so far as to call him a “narcissist” who believes that he is God.

A few hours after the 10-minute press conference wrapped up, Texas A&M athletic director Ross Bjork made himself and the program look even more ridiculous.

According to Sports Illustrated’s Ross Dellenger, Bjork called Southeastern Conference commissioner Greg Sankey and whined about Saban’s comments on Fisher and his program. It was extremely tough look, considering that he previously oversaw an Ole Miss program that was hammered with sanctions over recruiting violations.

Rather than taking his lumps and focusing on his own problems, Bjork went crying to the teacher. He claimed that Saban violated SEC bylaws on sportsmanship and pointed fingers.

And it totally backfired on him.

In response to the SEC West coaches’ saga, as well as Bjork’s crybaby plea, the SEC issued a punishment. It was issued not just to Saban, but also to Fisher. Although the punishment couldn’t matter any less.

Both Saban and Fisher have been issued a “public reprimand,” whatever that means.

Here is the full statement from Sankey and the conference:

Statement from Greg Sankey in response to this week's war of words between Nick Saban and Jimbo Fisher, both coaches officially receive a Public Reprimand pic.twitter.com/bfc7qADRNE

Essentially, both Saban and Fisher got slaps on the wrists. And it might not have happened at all without Bjork calling Sankey and complaining.