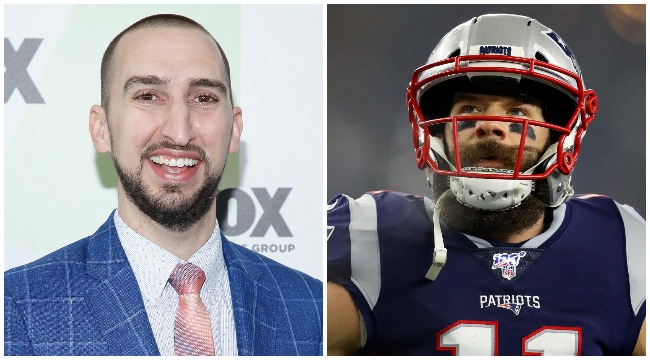 In no way do I think they actually believe 90% of the shit they say. How could they?

But when they start to venture into the realm of morality, the stakes become higher, and so should our standards.

Enter Fox Sports talking head Nick Wright, who appears to believe that Julian Edelman should sacrificed in the public square for getting drunk and jumping on the hood of a Mercedes-Benz.

Imagine being this worked up about a misdemeanor vandalism charge where literally no one was hurt.

I’m sure this will be dealt with in the media with same seriousness of @obj’s multiple criminal violations, such as wearing an expensive watch, wearing a multicolor visor, and wearing mismatched shoes. https://t.co/6TPrg4TDQ0

Edelman have 👃🏽🍬🍭in hotel room? Has he thrown his QB under 🚌?Has he told people he was about winning then no showed for OTAs? told other teams to “come get me?”-granted @getnickwright no one mentions his PED suspension.. but let’s not act like he is a PITA like ya boy OBJ https://t.co/Y5vAjtweEy

Nick then abides by Sports Media 101: Double down on a bad take with non-sequitur arguments because you should always choose winning even if you come off like a jackass.

On one hand you’ve got a WR who has been suspended for PEDs and now been arrested.

On the other hand you’ve got a far, far better WR who has never been in any off the field trouble whatsoever.

Yet, the former is held up as being the paragon of a good teammate & professionalism.

Yes, and Julian has been in the league twice as long as OBJ has, and PED’s are tight, nerd.

Sports Media 201: If all else fails, petty-fog the shit out of the issue.

Healthy enough to jump up on the hood of somebody’s car, tho… https://t.co/oghj6MPel1

Mr. Wright must’ve not done his homework for the cautionary lesson of The Internet Never Forgets.

I love Michael Jackson's music. I also believe he abused kids. Tyreek Hill is amazing. He beat up his girlfriend. Separate art from artist.

When a Twitter user pressed him on his logic and asked whether or not he’d be okay with NFL teams signing guys like Greg Hardy and Ray Rice, Wright responded:

Try to imagine the mental gymnastics one has to do to believe defend a hood of a Mercedes with more vigor than the victims of domestic violence.

The federal government must enforce Take Police before our civilization crumbles to the ground.