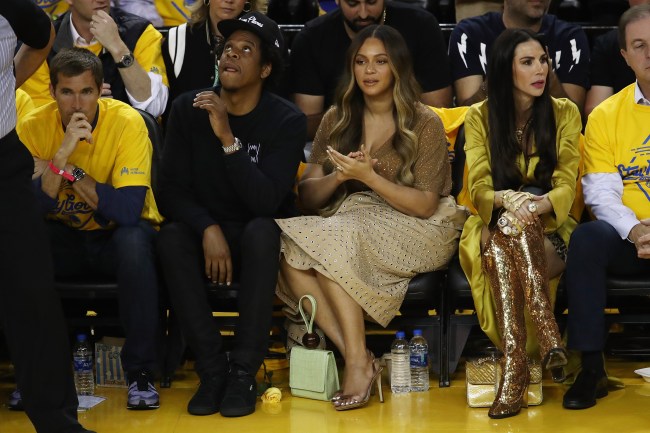 During last night’s game 3 of the NBA finals Jay-Z was seen speaking with wife of Warriors owner Joe Lacob Nicole Curran while Beyonce looked on.

Beyonce’s reaction to Curran’s convo with Jay took a life of its own on social media.

Beyoncé don’t like that girl beside her at all.

I would leave the earth if Beyonce looked this ready to smack me https://t.co/Yaf4JKeMhN

I’m not sure how we have any unsolved mysteries in 2019 when the Beyhive exists…hire them pic.twitter.com/CCVuqBMpc4

Apparently Curran was forced to disable her Instagram account after receiving death threats and harassment from the Beyonce’s “Bey-Hive”.

this is so sad pic.twitter.com/eAVCdkjgN0

Just spoke to Nicole Curran, the wife of Warriors owner Joe Lacob, about the “incident “ with Beyoncé last night. She was in tears. Said she had been getting death threats on social media all night this morning she disabled her IG account just to make it stop.

Curran says Jay Z asked for a vodka soda. She asked if he wanted lime with that. But it was loud in Oracle and she couldn’t hear, so she leaned over. That’s where the photos of Beyoncé looking askance at her come from.

Curran says she then went to go get them those drinks. “There was no hostility. I was trying to be a good hostess,” she said. “I’ve never experienced cyber bullying like this. I can’t believe our players go through this. That kids go through this.“