Nike Is Reportedly Concerned About Zion Williamson’s Weight, Want Him To Slim Down To Prevent Future Knee Injuries 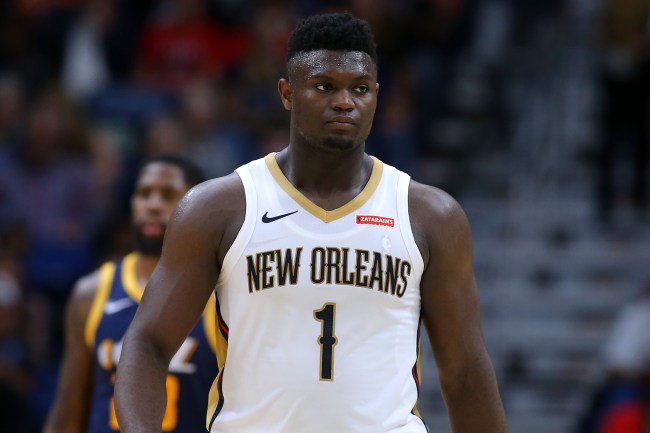 Earlier today it was reported that #1 overall pick Zion Williamson was set to miss the first few weeks of the NBA season with a right knee injury.

A severe injury has been ruled out for Zion Williamson’s right knee, but he is expected to miss period of weeks to start regular season, league sources tell ESPN. Pels are clearly treating injury with an abundance of caution but there’s no shortage of confidence on full recovery.

pparently the injury isn’t serious but the Pelicans are being extra cautious.

The Pelicans figure to be cautious regarding Williamson’s return, but the team is confident he will make a full recovery. The 6-foot-7, 284-pound Williamson missed time in summer league after he banged his left knee in a collision with another player. After just eight minutes, the Pelicans shut Williamson down for the summer, although they said they were just being overly cautious.

According to ESPN’s Stephen A. Smith, Nike is concerned about Zion’s weight and wants him to shed a few pounds before he comes back from this issue.

Via Stephen A Smith on First Take transcribed by Bleacher Report

I got a tip from somebody: strained meniscus. Somebody told me that what they’re not telling us is that he’s got a strained meniscus, and Nike is concerned about his weight. And they want him to use this opportunity to get some weight off him so he doesn’t put as much strain on that knee.”

Zion’s weight has been a hot topic in NBA circles and it seems like everyone is in agreement that Zion is too havy right now.

The concern all along for NBA executives with regard to Zion Williamson was whether his body and 270 or so pounds could withstand the manner in which he plays. Let’s hope he gets healthy soon, because he’s not just fun to watch, but is also a terrific kid.

Zion is too heavy.. just my opinion. So much pressure put on his joints by the massive force of his body.. Pels should try and get him in the 240s to play

One of the only concerns about Williamson was how his body would hold up at that weight & the stress he puts on his joints with all those explosive moves. Hopefully this won’t be a recurring problem, because Zion is a special talent. https://t.co/6oi77K8mFy