Nikola Jokic’s Brothers Join Twitter Specifically To Threaten Marcus Morris: ‘We Will Be Waiting For You’ 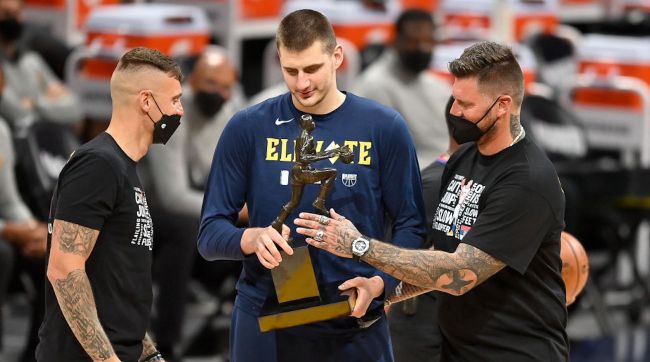 Nikola Jokic’s brothers, Strahinja Jokic and Nemanja Jokic, created a Twitter account on November 9 and immediately used it to threaten Marcus Morris. Morris’ brother Markieff and Nikola got into a bit of a scuffle during the game between the Denver Nuggets and Miami Heat on Monday night, with Jokic — the league’s defending MVP — leveling Morris with a blindside hit following a tough foul by the Heat forward.

Nikola Jokic and Markieff Morris were both ejected from the game after the two exchanged hard fouls. pic.twitter.com/AtOklXIU5k

Then, on Tuesday morning, an account — without a profile picture, mind you — named @JokicBrothers popped up to send the following message to Markieff’s brother Marcus, who tweeted about the incident following the game.

Waited till bro turned his back smh. NOTED ✍🏾

“You should leave this the way it is instead of publicly threatening our brother! Your brother made a dirty play first. If you want to make a step further be sure we will be waiting for you !! Jokic Brothers.”

The account was confirmed to be theirs by the brothers themselves, according to Denver Post reporter Mike Singer.

Just got a text from Jokic’s brother. This is their real account responding to Marcus Morris’s tweet last night. https://t.co/ON4AH3JxwN

Not only does the account not have a profile picture, but it has no likes, no retweets, and no replies other than sending one to Marcus Morris directly.

You should leave this the way it is instead of publicly threatening our brother!Your brother made a dirty play first . If you want to make a step further be sure we will be waiting for you !! Jokic Brothers

This is why the NBA isn’t like any other league in the world: it’s half a reality TV show. Perhaps now that we’re in the age of celebrity boxing, Marcus and Markieff can take on Strahinja and Nemanja in a pay-per-view event. Who wouldn’t want to see that? The Morris twins stand at about 6’9″, while the Jokic brothers look to be about the same based on photos of them standing next to their 6’11” brother Nikola. Hell of a fight that’d be.