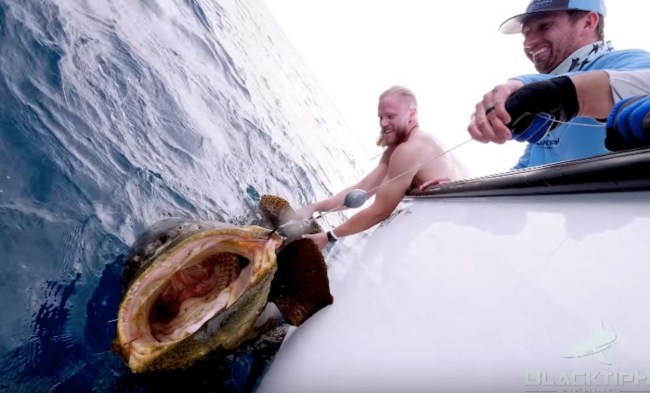 Pitchers and catchers reported to camp earlier this month. The Cactus League kicks off on February 21st with the far superior Grapefruit League beginning a day later on February 22nd. This means the Sunshine State is once again swarming with pro athletes.

The New York Mets spend Spring Training in Port St. Lucie, at First Data Field about halfway between Jupiter and Fort Pierce. These are prime fishing grounds on the Atlantic Ocean and Josh from BlacktipH, the largest fishing channel on YouTube, got four New York Mets pitchers to go out fishing with them.

The target species? Goliath Grouper, the largest grouper species in the state of Florida. As the name implies, these fish are massive. The all-tackle IGFA world record on this species is quite outdated because there’s been a moratorium on keeping them for decades, but the record set in 1961 in Fernandina Beach, Florida sits at 680-pounds.

Here we’ve got a battle of Thor versus Goliath as Noah hauls in a massive 300-pound grouper alongside fellow pitchers Seth Lugo, Jacob Rhame and Tyler Bashlor. The sharks were everywhere and this was definitely an electric day on the water:

In total, the crew caught two big Goliath Grouper and two Bull Sharks within the span of a few hours. A pretty successful day on the water, all catch and release.

The BlacktipH YouTube channel tends to get really hot this time of year when the annual mullet migration passes by the East Coast of Florida. Millions and millions of small baitfish make for an easy feast by the large predators, tarpon and sharks. So be prepared for some absolutely stunning footage in the coming days.