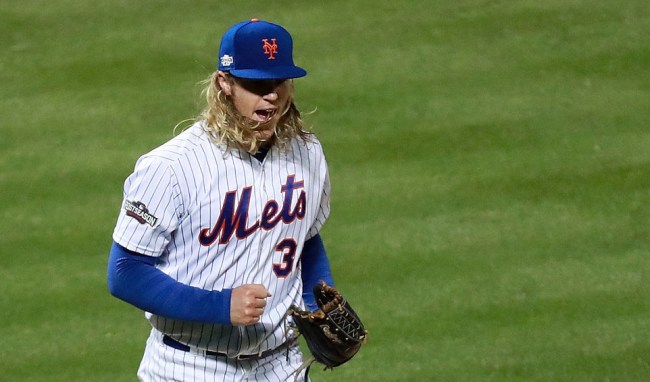 So what does a guy like that do in the offseason in an effort to make himself throw EVEN HARDER? Well, let’s just say that it involves something called the “Bowl of Doom.”

Noah Syndergaard reported to camp Sunday and told reporters he — seriously — gained 15-17 pounds of muscle, wants to throw HARDER in 2017.

Noah Syndergaard spent the winter eating bowls of venison and wants to throw harder this season. I have nothing to add to that. #mets

So Syndergaard’s venison dish is called the “Bowl of Doom.” Because of course it is. #mets

So what is this “Bowl of Doom”?

It consists of sweet potato hash, half an avocado, two eggs and a choice of protein ranging from wild salmon to rib-eye steak. But Noah Syndergaard prefers his with applewood smoked bacon, venison and buffalo.

“That’s primarily what my diet consisted of this offseason,” the imposing righthander said Sunday, when pitchers and catchers reported to Mets camp.

So why did Syndergaard feel that adding so much weight would be beneficial to a guy who already throws harder than most everyone else?

“Hopefully, it allows me to go deeper into games with more ease,” he said. “But I also paid a lot of attention to maintaining my flexibility so pitching is not just max effort. It’s all about being fluid and having flexibility out there.”

If this added weight combined with the “Bowl of Doom” can make Syndergaard even better at baseball than he already is at Twitter then National League hitters are going to be for a very long season.

Mr. Met and Noah Syndergaard are currently engaged in a Twitter war. Is it a shoot? Is it a work? Or maybe a worked shoot.