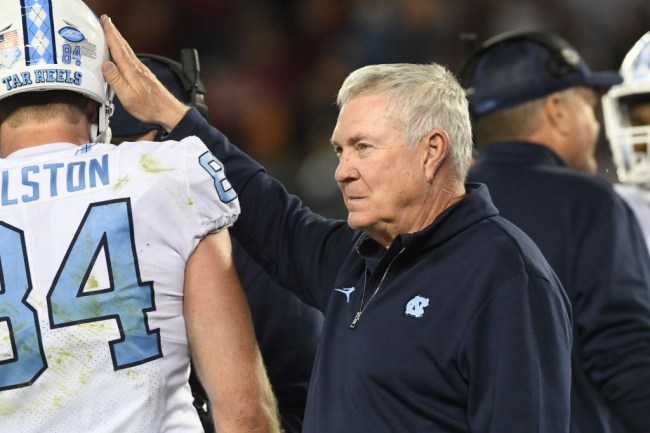 Well, 2020 just keeps on getting weirder. North Carolina is making enormous moves on the recruiting trail, and I’m not talking about basketball.

As it stands right now, UNC football has the No. 3 recruiting class for 2021. It’s not too often the Tar Heels’ football program has a higher ranked recruiting class than the hoops team, but that’s the case right now as the basketball team sits 27th in the nation at the moment, according to 247 Sports.

Mack Brown has been putting in some serious work this offseason as the Tar Heels already have 11 four-star recruits committed to the program and on Tuesday night they received more good news as five-star corner Tony Grimes committed to UNC out of Virginia. Grimes is the highest-rated prospect to commit to the program since 2007 and is regarded as the No. 1 cornerback in the ’21 recruiting class.

Following his commitment on Tuesday, Grimes was very much feeling himself and did the unthinkable of guaranteeing a national championship within three years of his arrival. North Carolina has never won a national title since fielding its first football team back in 1888.

“We most definitely can win a national title, and we will,” Grimes said. “Either if it’s my first year, my second year or my third year, definitely before I leave we will be winning a natty.”

After 5-star cornerback Tony Grimes (@757EliteDB) committed to UNC over Ohio State, Texas A&M and Georgia, he made it clear that he expects big things from the Tar Heels.

"We most definitely can win a national title and we will."https://t.co/6C8EjvKmzZ pic.twitter.com/SEJAMqVWkG

Not only is he guaranteeing a national title during his career in Chapel Hill, but he also revealed his plans of only playing college football for three years before entering the NFL Draft.