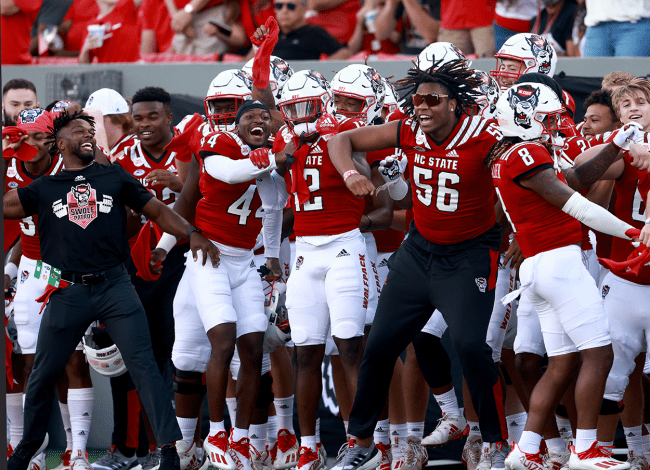 As the college football season quickly approaches, programs all across the country are gearing up for the fall. That includes all kinds of workouts, film sessions, and plenty of team bonding.

North Carolina State took a break from the gridiron on Friday to partake in the latter and it resulted in a hilarious video.

Over the course of the last few years, there has been a rise in popularity of ‘Battle Balls.’ The giant, inflatable balls have a small opening in the middle that allows a person to get inside.

From there, two people inside the balls run at one another and try to rock the other person’s world. Should one of the two participants get knocked down, they are surrounded by a giant bubble to brace them from impact.

The team, either after practice or on a day off, gathered on the practice field for a competition. A ring was set up in which the players battled it out inside their bubble balls.

In football, and in battle balls, the low man always wins. Belton, who stands 6-foot-6, 335 pounds, learned that lesson the hard way and got obliterated. He took the hit, went flying backward, bounced off of the ground and flew out of his ball. It was epic, take a look:

Belton’s misfortune is hilarious and we are the beneficiaries of the truly hilarious moment. Maybe he won’t come in so high against ACC defenders this fall as a result.