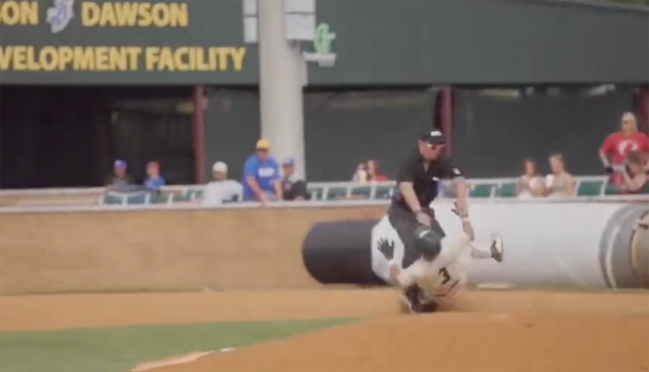 Northeastern State baseball, of the Division-II MAIAA conference, had its historic season end in the most ridiculous way possible over the weekend. The RiverHawks concluded their season with a 38-18 record, its best season in more than two decades, but were robbed of an opportunity to go further.

On Saturday afternoon, Northeastern State faced Henderson State in the NCAA Central Regional. After falling behind 11-5, the RiverHawks rattled off five runs in the bottom half of the ninth inning.

Blaze Brothers, one of the best names in baseball, cleared the bases with two outs. He represented the tying run and rounded first to try and reach safely with a double.

In the process of turning toward second, Brothers ran full-speed into the umpire standing in the base path and OBLITERATED him in the process. He ultimately recovered, got back to his feet and slid into second safely. Or so it appeared.

Instead, a ludicrous ump show proceeded to unfold. Instead of the game being 11-10 with Brothers on second and two outs, the umpire who got ROCKED called him out.

The game, and Northeastern State baseball’s season, was over. That was it.

Of course, it did not go over well. RiverHawks head coach Jake Hendrick proceeded to lose his mind, and rightfully so. But the umpires did not overturn the call.

Now, Northeastern State may have lost anyway. But the very next batter, who would have represented the winning run, was the Central Region Player of the Year and hit 28 (!!) home runs on the season.

He never even got the chance. Take another look at the collision:

We may still lose – but the guy coming to the plate is one of the scariest in the country and it should’ve been decided that way and not like this https://t.co/hif7OKSHtF pic.twitter.com/Lh5QtKw23M

And to make matters worse, here is the position of the umpire who called the out at second. He had no clear view of the play.

He was safe. After the collision this is the positioning the out call was made. pic.twitter.com/WS3MpyaQTi

What a shame. Heart-breaking for the RiverHawks.