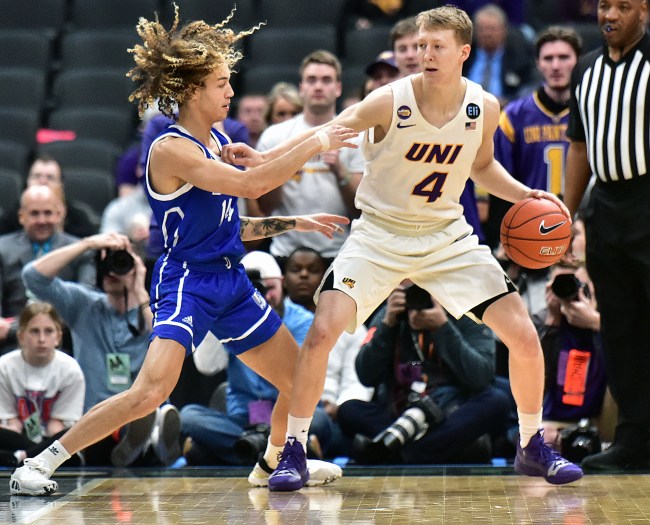 There’s getting hot and then there’s what AJ Green just did to close out the first half against St. Bonaventure. The man absolutely put his team on his pack in their biggest game yet this year.

Northern Iowa wasn’t expected to have much to offer St. Bonaventure today. The Panthers were 1-3 coming into today and had to go on the road to face a St. Bonaventure squad that has raked up a few impressive wins en route to a 5-0 start. AJ Green doesn’t seem to care about any of that.

Northern Iowa was trailing 33-30 with 3:17 left in the first half until Green decided to take over the game. He proceeded to go on a 17-1 run by himself to put the Panthers up 47-34 as they headed into the half.

His run included a pair of free throws and 5 consecutive made 3s. In total, he has 22 points on 6/10 from 3 and these aren’t even easy looks he’s knocking down. Take a look at the last shot he knocked down before the half.

Before that, he knocked this shot down between 2 defenders.

Just about a minute left and AJ Green is feeling it! Panthers lead! #EverLoyal pic.twitter.com/tmqmXB1gYE

Green’s hot shooting now has Northern Iowa looking at a great chance to get their biggest win of the season against the #16 Bonnies.

It was an absolutely unbelievable few minutes from AJ Green. If he keeps shooting like that, St. Bonaventure is going to have a hard time clawing their way back into this one.