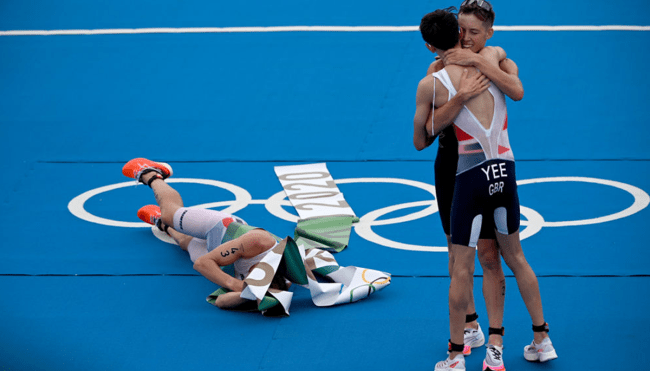 The vast majority of the athletes that made the trip to Tokyo to compete in the Summer Olympics have devoted their lives to mastering the discipline that brought them there. However, there are also some competitors who apparently decided that becoming the best in the world at a single sport is the coward’s way out.

In addition to the mad lads and lasses who will participate in ten events over the course of the pentathlon, there are also the triathletes who had the chance to pick between going all-in on swimming, cycling, and running but channeled the girl from the Old El Paso commercial by ultimately asking “Por que no todos?”

That includes Kristian Blummenfelt, who kicked things into high gear in the final leg of the triathlon to overcome Britain’s Alex Lee on his way to winning a gold medal for Norway on Monday.

As the clip shows, Blummenfelt was running on fumes by the time he hit the finish line. What that clip doesn’t show, however, is the Norwegian puking all over the place before being carried away by race officials who led him to the wheelchair that was used to ferry him to get the medical help he was in serious need of.

When you consider Blummenfelt had just traveled over 30 miles while combatting temperatures that peaked at 91°F on Monday, it’s hard to blame him for raining on his own parade with a puke shower—and I doubt he has any regrets considering the results.