Notre Dame’s AD Floats Remarkably Dumb Idea Of ‘Only Having Students In Attendance, No Other Fans’ Instead Of Playing Football Games In Empty Stadiums 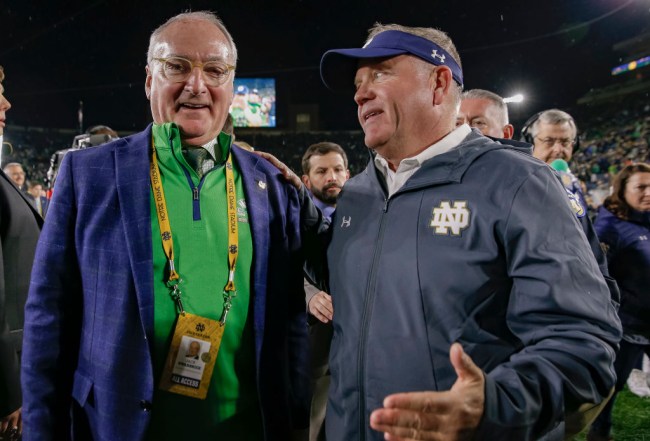 You’ve probably read this sentence hundreds of times over the past few weeks, but nobody knows when the sports world is going to hit the start button again.

Right now nobody has a clue when, or if, students will return to campus this summer or fall and the idea of playing games without any fans in attendance has been one of the many rumors floated out there to perhaps help the college football season kick off as scheduled.

Notre Dame athletic director Jack Swarbrick isn’t a big fan of the idea of playing college football games in empty stadiums, however. The 66-year-old made it very clear that he’s a traditionalist in explaining that cheerleaders and the band are vital parts of college football.

That’s fine, you can’t fault the guy for loving tradition, but you can fault him for what he said next.

Instead of playing games without any fans in attendance, Swarbrick came up with the bright idea of only allowing students to attend games, but no other fans.

“College football is about the cheerleaders and the band and the campus environment on game day,” Swarbrick told ESPN’s Adam Rittenberg. “We’re interested in solutions that allow us to have a traditional game-day experience.”

“There might be a middle ground where you say, the first two games of the season, you might have to make some accommodations,” he said. “Maybe you only have students in attendance and you don’t invite other fans. I couldn’t see us going past a very limited example of that.”

I’m no scientist or doctor, but I don’t think that’s going to be the solution for all of this, sir.

We’re still very early on in terms of this entire situation we find ourselves in, but Mr. Swarbick undoubtedly holds the title of ‘worst idea ever’ of this young era of trying to figure out how the sports world gets back into action.

Don’t worry, we’re sure to hear plenty of other bizarre ideas over the coming weeks.