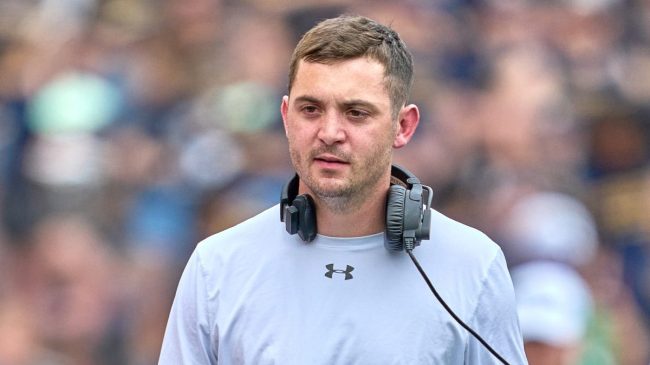 The Notre Dame Fighting Irish caught the attention of the entire college football world in week one. The Irish went into Columbus and caused havoc for the Ohio State Buckeyes before eventually falling 21-10.

Right now, they probably wish they could deflect some of that attention. Particularly offensive coordinator Tommy Rees.

Rees played quarterback for Notre Dame under Brian Kelly from 2010-2013. He served as the backup to Everett Golson on the 2012 Fighting Irish team that reached the national championship game against Alabama,

Now the former three-star recruit out of Illinois is considered one of the brightest young minds in the coaching industry. He twice made 247Sports’ list of the 30 best coaches under 30.

Rees began his career as a graduate assistant at Northwestern in 2015. He then spent a year in the NFL as an offensive analyst with San Diego Chargers. In 2017, Kelly named him Notre Dame’s quarterback coach. He elevated to offensive coordinator in 2019 and retained the position when Marcus Freeman took over following the 2021 season.

Despite the high praise, Rees’ offenses haven’t always been the most dynamic. The Irish struggled mightily on offense in week one against the Buckeyes. But many figured a week two game against MAC opponent Marshall would serve as a chance to get it going.

That didn’t happen. Instead, Notre Dame trailed the Thundering Herd 9-7 at the half and 12-7 heading into the final quarter. A Tyler Buchner quarterback sneak put the Irish ahead 15-12 in the fourth quarter. But Marshall remains within three points at the time of writing and Notre Dame fans are calling for Rees’ head.

🚨MELTDOWN ALERT 🚨 #NotreDame is tied at 0 with #Marshall in the first quarter. #MeltdownAlert #FireEverybody pic.twitter.com/xXrhWsm4wP

Touchdown Jesus can forgive a number of football sins. But it appears a sputtering offense is not one of them.