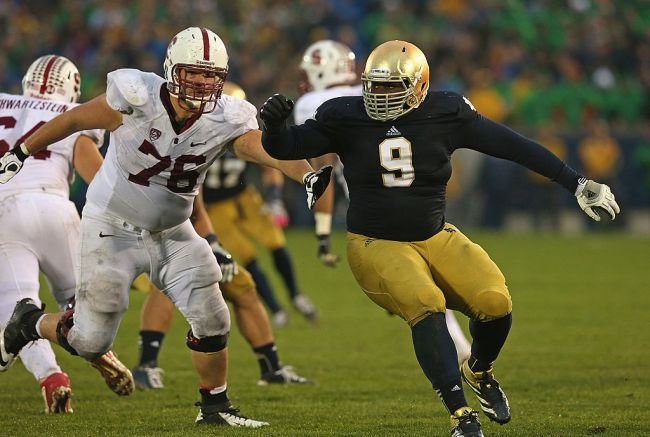 Former Notre Dame football player Louis Nix III posted a concerning video on Tuesday night from what looked to be the back of an ambulance explaining that he had just been shot. Nix said he was simply putting air in his tires when someone shot and robbed him.

In the video he posted to his Instagram Live, Nix said “If I don’t make it, I really do love everybody.”

Thankfully, the 29-year-old announced via his Facebook on Wednesday that he did make it, but surgery was the next step in his recovery. Nix explained in the post that the bullet that hit him entered one of his lungs.

He was shot last night while putting air in his tires.

Looks to be making some progress. pic.twitter.com/8WF1Rqw85K

I’ve never been shot, but I don’t think one of my initial reactions would be to let my Instagram followers know via a live video from the back of an ambulance about the situation, but hey, that’s just me. I guess it is the quickest way to let anyone and everyone that cares about you what’s going on in your life.

Nix had a great career with the Fighting Irish that propelled him into being a third-round pick in the 2014 NFL Draft. After being drafted by Houston, he went on to play for Washington, the Giants, and the Jaguars before suffering multiple knee injuries.