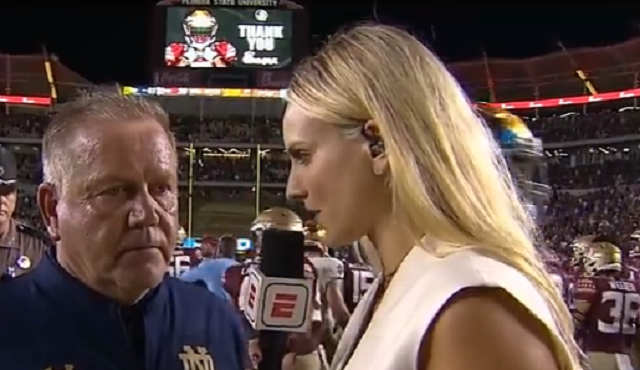 Notre Dame eked out a win against FSU but Brian Kelly was not thrilled with his team’s performance.

On Saturday night, Notre Dame was able to hold off FSU and beat them by three points in overtime despite blowing a big lead in the fourth quarter.

The thrill of victory and the agony of defeat.

After the game, an annoyed Kelly made a joke about wanting his team executed over their poor execution in the game and it didn’t go over well on the Internet.

The original quote came from John McKay, legendary coach of the creamsicle Bucs:

“What do you think of your team’s execution, coach?” asked a reporter. McKay replied, “I’m in favor of it.”

Brian Kelly… calls for the execution of his entire team? After winning? Wtf

How Brian Kelly can still be in charge of college aged kids I'll never understand https://t.co/G4aj453CP7

Notre Dame players when Brian Kelly asks them to stay late after practice for a few minutes pic.twitter.com/RNk8dRaojo