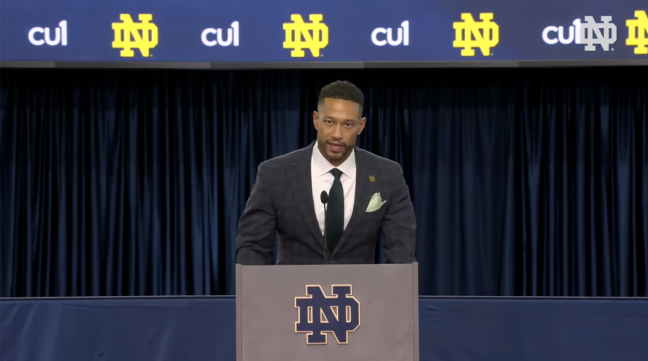 Marcus Freeman was officially introduced as the new head coach of Notre Dame football on Monday. Despite the historic hire and fanfare around the event, one thing in particular stole the show— Freeman’s fade.

For those who are not familiar, a fade is a type of haircut. It’s pretty self-explanatory. The sides and the back are trimmed so that the hair gradually changes in length from the longest around the top to the shortest at the hairline. There are different variations of the cut, but the hair fades in/out depending on whether you are looking from top to bottom or bottom to top.

Anyway, Freeman showed up to his press conference looking great. His fade was on point, he was all lined up, and it was blended perfectly. Not a single flaw.

Unclear what to do with the fact that a fade this clean will be representing Notre Dame for the foreseeable future pic.twitter.com/XVkVx7QNM8

In response to the remarkably clean cut, the internet had all kinds of questions, jokes and reactions.

The biggest question, considering that South Bend is what it is (super Catholic), is where Freeman can get a fade that clean in the city?

And IN South Bend no less. https://t.co/D5c9CCdRAP

Honestly his ability to find a quality barber in South Bend, Indiana is proof enough on scouting talent. https://t.co/csrfdRPumD

Mans definitely go to Chicago and get cut up ain’t no way you getting a fade like this in Indiana https://t.co/XZjyNkux8e

Others wanted to know where he got his haircut.

You gotta do the story on how Marcus Freeman gets that clean in South Bend, Indiana

After some digging, I found the guy who gave Freeman his fade.

His name is Julio Rodriguez, he is only 24 years old, and he is the go-to licensed barber for the entire Notre Dame football team. As of 2019, he was operating ‘Julio’s Cutz’ out of his parents’ basement on the southwest side of South Bend.

Now, two years later, he owns ‘Exclusive Studios’ in Minshawaka. He has a full-blown operation these days and plenty of game-worn merchandise from former Fighting Irish players to prove his resume.

Rodriguez and his barbershop is located 17 minutes from Notre Dame Stadium. He retweeted Freeman’s fade on his Twitter account @JuliosCutz, so clearly he is taking credit.

Freeman looked fresh as he stood at the podium and it didn’t go unnoticed.

This tweet is so funny to me… because I had the exact same thought. https://t.co/ZlXYuKjWkn

And this wasn’t the first time that people were excited about Freeman’s fade.

Marcus Freeman's fade stays tight. Dude has to be getting lined up every damn week

Ngl the fade I just got would make marcus freeman proud. #freshclippers

Notre Dame hiring Freeman made the Irish infinitely more likable overnight. Freeman showing up with a clean fade from Rodriguez makes him almost impossible to dislike. The next time you’re in South Bend and need a haircut, you know where to go.