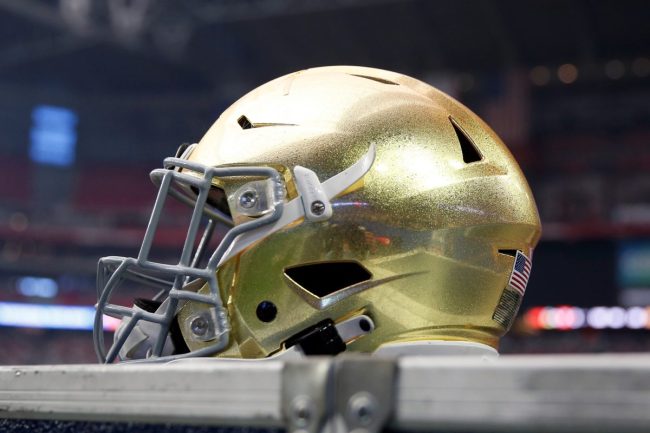 The clip mimics the hilarious movie’s most famous scene, where the “Hangover” cast sets out to make a deal to get their friend, Doug, back. In this case, Doug is the jersey, and the Golics are the gangsters.

The trio of Fighting Irish members meets the Golics in the desert of Las Vegas, successfully making the swap. There’s one catch, though. The old timers have given Freeman and Co. a Notre Dame jersey from the 1980s AKA, the wrong Doug.

After a brief moment of dejection, coach Freeman realizes where the real jerseys were the entire time. They double back to their hotel and find the true uniform sitting atop the roof.

Those jerseys are white with gold trim, an alternative look from the Notre Dame classics. The Vegas theme cements that these jerseys will be worn in the team’s neutral site matchup against BYU for the Shamrock Series.

Fans on social media had some fun with the clip, posting their immediate reactions online.

After seeing Notre Dame reveal their new uniforms in funniest of ways, the college football world responded on Twitter. Take a look at the reaction.

This is now the best Hangover sequel. Admittedly, the bar was low. https://t.co/9uC30rmxaE

This is absolutely phenomenal. @erocker1631

Marcus Freeman is the coolest person on the planet.#GoIrish https://t.co/MQLhnAC0o0

how bout that ride in? https://t.co/uORvDY1O5Q

This is great 😂☘️ https://t.co/dZIXzxxKHT