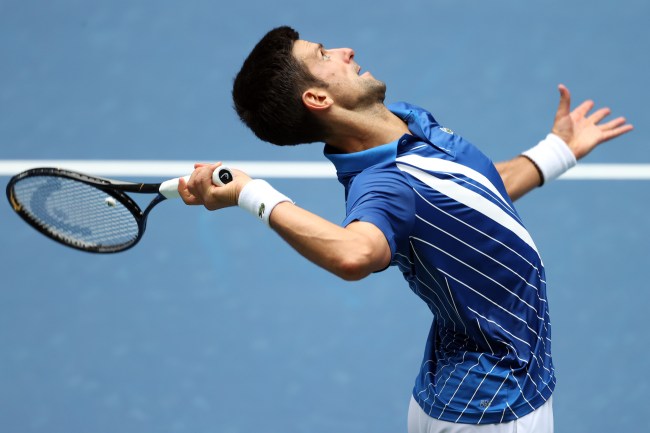 Novak Djokovic is the current #1 ranked pro tennis player and the world and he’s the favorite to win the 2020 U.S. Open in Flushing Meadows where the players are all living and competing in a unique bubble situation. If you haven’t watched any of the U.S. Open coverage yet on ESPN it’s pretty interesting to hear the stories of players like Venus Williams getting to walk around the grounds for the first time in her life and getting to see things like the Hall of Champions (where she’s honored).

At any other point in U.S. Open history, these superstars would be mobbed by fans if they tried to walk around and grab lunch but there are no fans this year and it’s made for a unique atmosphere. Despite the precautions in place, #1 ranked Novak Djokovic has chosen to branch out on his own a bit.

AP Tennis writer Howard Fendrich is reporting that Djokovic dropped an easy $40,000 on a house rental instead of staying in the hotel provided/paid for by the U.S. Tennis Association. And he did so because the windows in his hotel room wouldn’t open.

Novak has an estimated net worth somewhere in the realm of $220 million. He was the first male tennis player to earn over $100 million on the court and he’s brought in $144 million in career earnings to date. No doubt he’s made a legitimate fortune from endorsements as well. So $40,000 is just a drop of water in the bucket to him. But his reasoning is still pretty hilarious to me:

”As soon as there was a chance for us to choose to be in a house, we took it right away — without thinking. I’m glad we did,” the top-ranked Djokovic said after improving to 25-0 this season and reaching the U.S. Open’s third round with a 6-7 (5), 6-3, 6-4, 6-2 victory over Kyle Edmund on Wednesday. ”Any player had that opportunity. It’s not the privilege of the top guys or girls. Anyone that wanted to spend money and stay in the house, he or she could have done that,” Djokovic said. ”I know there’s very few players that have chosen to stay in a house, but it is a personal choice.”

Why did Djokovic go that route?

”Well, I think it’s obvious. Being in a hotel, you’re unable to open the window in the room. You constantly have to be with a mask indoors, outdoors, everywhere. You can’t really go out, spend time in the garden, maybe, outdoors,” he said. ”I saw the hotel. The hotel is not in a best position in terms of having nature around. It’s very close to the highway.” (via Yahoo! Sports)

Listen, I get it. Hotel rooms can feel suffocating. I once left my dog in a hotel room in Toronto with the A/C on in the Summer and it turned out they don’t have A/C in those hotel rooms in August, only heat, and came back to a scorching hot hotel room and a dog excessively panting from the heat. It was terrifying.

Not being in control of your living situation is distressing and if I was in Djokovic’s shoes I would’ve done the same thing. I’m mostly curious where and why he chose whatever rental house he did. If he went with a property in Queens, Westchester, maybe The Palisades in New Jersey, or Long Island. He has all sorts of options and I wonder what the thought process was when choosing a house.

Anyway, Novak Djokovic entered the U.S. Open as a -125 favorite to win the men’s title.