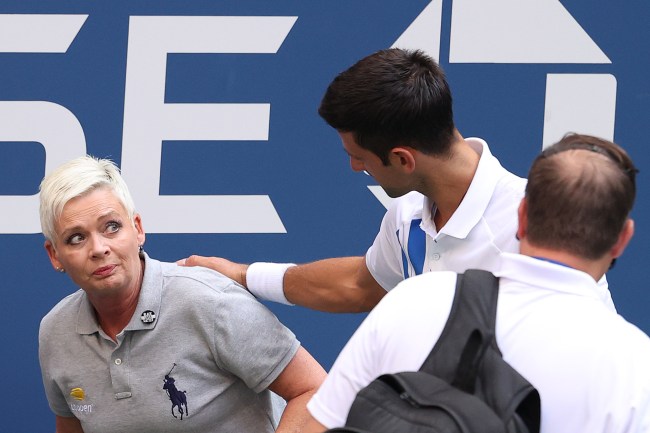 Novak Djokovic’s time at the US Open is over after he made a dumb mistake while throwing a fit on the tennis court.

After going down 6-5 in the first set, a frustrated Djokovic casually smacked a ball in anger that went on to hit a line judge in the throat.

HOLY CRAP. Djokovic defaulted after he inadvertently hits a ball and strikes a line judge in the neck. She had to leave. pic.twitter.com/BECdydrKFw

Djokovic knew he had messed up as soon as he hit the ball.

The moment that #1 Novak Djokovic knew that his #USOpen and his undefeated 2020 season were over. pic.twitter.com/uwd5fbXKb1

Djokovic went over to apologize afterward but the line judge did not look happy.

The moment she gave him that look, it was over for him. pic.twitter.com/SZysRJYQa7

Officials eventually decided to default/DQ Djokovic from the US Open for his actions.

Djokovic has had issues with this previously in his career, throwing his racquet etc very close to linespeople/ballkids.

And just like that, with #1 Novak Djokovic getting himself defaulted, we are guaranteed to have a new Grand Slam champion in men's tennis for the first time in six years.#USOpen