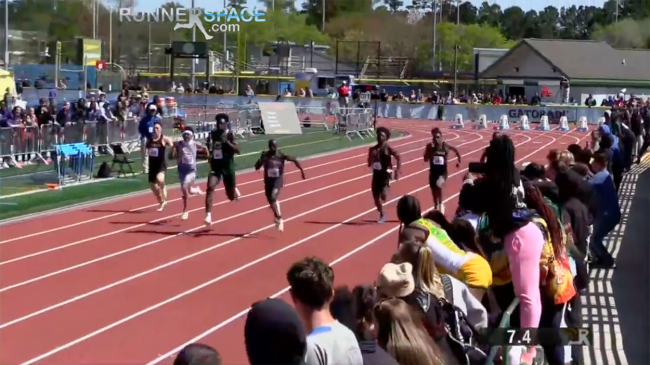 Nyckoles Harbor isn’t the top college football recruit in the Class of 2023, but he is by far the most freakish. He is absolutely massive and has speed that is unmatched by most skill position players.

Harbor, a soon-to-be rising senior at Archbishop Carroll High School in Washington, D.C., stands 6-foot-5, 235 pounds. He is slated to play the defensive end position in college, but he could just as easily lineup at almost every other position on the field and be just fine.

As a two-sport athlete, the nation’s No. 13 overall recruit runs both the 100-meter sprint and the 200-meter sprint for his school’s track team. And his times are insane.

During the indoor season of his junior year, Harbor ran the 200-meter sprint in 21.36 seconds. It was the fourth-fastest time ever for a high schooler.

On Saturday, Nyckoles Harbor torched everybody in the 100-meter sprint.

At the Beach Run in Myrtle Beach over the weekend, he ran a 10.32-second 100-meter and won the event. His time was .25 seconds off of the Olympic qualifying standard and less than a second off of the world record.

Nyckoles Harbor and T'mars McCallum battle it out once again at the Beach Run Invitational in Myrtle Beach.

To make things even crazier, Harbor ran a 10.29-second 100-meter sprint the day before.

As things currently stand, Harbor’s recruitment is wide open. He could go anywhere that he wants in the country on his athleticism alone, but he also carries a 4.5 GPA.

Of the schools that are in the mix, Maryland, Michigan, Penn State, Alabama and Oklahoma seem to be the top-five. Harbor also has offers from South Carolina, Georgia, Notre Dame, Ohio State, USC, Texas, Florida State, Tennessee and countless others.

Wherever Nyckoles Harbor ends up, he is going to be a nightmare for opposing offensive lines. Honestly, give him a sixth star.