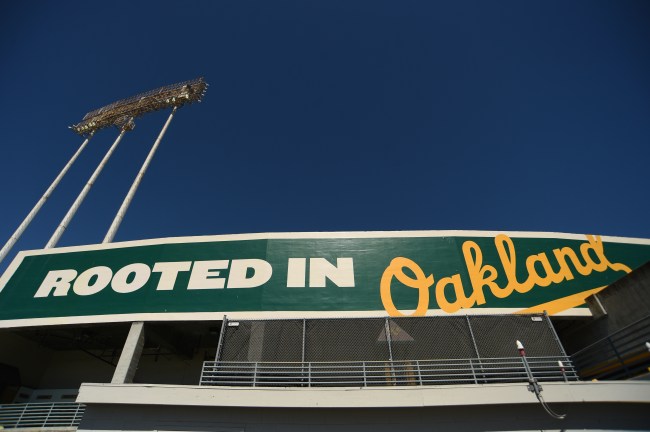 The Oakland A’s are seriously considering moving the team due to a dispute with the city and fans aren’t happy about it.

According to ESPN’s Jeff Passan, The A’s are threatening to relocate to another town if the city of Oakland doesn’t approve a $12 billion plan this summer to build them a new waterfront stadium in Downtown Oakland.

BREAKING: The Oakland A's will start exploring relocation possibilities after Major League Baseball suggested the organization consider moving to other cities if the Howard Terminal stadium proposal is not approved by local politicians.

While the A's have expressed that remaining in Oakland and building a $12 billion mixed-use development is their priority, the standstill of the project prompted today's move. The leading contender if the A's do move: Las Vegas. Plenty of other cities would welcome the team, too.

“The future success of the A’s depends on a new ballpark,” A’s owner John Fisher said in a statement. “Oakland is a great baseball town, and we will continue to pursue our waterfront ballpark project. We will also follow MLB’s direction to explore other markets.”

A message to our fans @Athletics pic.twitter.com/xF6TbALbzW

Fans weren’t happy with the team’s relocation threats considering the A’s have run a “rooted in Oakland” campaign for the past few years.

#RootedInOakland indeed. Sports teams talk about investing in community, but threaten to pick up and leave whenever they don't get their way. https://t.co/ErAgCrdhzm

the a's have done everything in their power to alienate their fanbase then come back when they want to build a stadium with the "rooted in Oakland" propaganda. we see right through that.

it’s comical they roasted the Raiders for moving to Vegas with their “Rooted in Oakland” campaign just to say, “hey, can we come too?” https://t.co/C0kIJjiNzo

Swear to fuckn GOD! I’m fucking done with all sports. Go ahead leave. @Athletics !!! Rooted in Oakland my ass. https://t.co/HiLQfccnSN

#RootedInOakland indeed. Sports teams talk about investing in community, but threaten to pick up and leave whenever they don't get their way. https://t.co/ErAgCrdhzm

Shots fired. Going public like this while still touting #RootedInOakland is an insult. And framing this like the @MLB is forcing your hand to look into other markets is BS. We’ve already lost two pro sports teams. @DaveKaval and @Oakland need to work this out NOW. pic.twitter.com/S2B5thC9SB