The Raiders Are Parting Ways With Sebastian Janikowski, An NFL Legend, After 18 Years 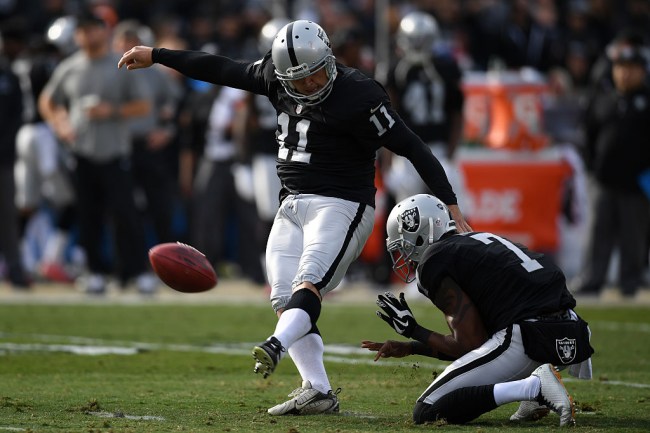 Janikowski’s entire life (and career) have been the stuff of lore. Born in Poland, he moved to the United States because his dad was a professional soccer player in the 80s. Sebastian Janikowski was a badass soccer player himself and played on the Poland U-17 team when he was 15-years-old. As an H.S. Senior at Seabreeze in Daytona Beach, Sebastian gained fame for kicking 4 FGs of 50+ yards which got the attention of Florida State Seminoles head coach Bobby Bowden.

Janikowski partied and kicked his way through college, making headlines along the way, and was drafted by the Oakland Raiders 17th overall in 2000. Now that the Raiders are parting ways with Janikowski that means THE ONLY player from the 2000 draft that’s still with the team that drafted him is Tom Brady with the Patriots. No players from the 2001 and 2002 NFL Drafts are still with the original teams that drafted them.

The news that the Raiders are dropping Janikowski broke on Twitter Moments last night:

Raiders informed kicker Sebastian Janikowski today that they do not plan to bring him back for the 2018 season, per source. An 18-year run with Raiders comes to an end.

Here’s how long Sebastian Janikowski has been around Raiders? Al Davis drafted him No. 17 overall in 2000 draft. Then HC Jon Gruden favored WR Sylvester Morris or RB Shaun Alexander. Morris played one season in KC; Alexander played nine years and was NFL MVP for Seattle in 2005.

18 years with the Raiders comes to an end. Sebastian Janikowski grew up before our eyes. pic.twitter.com/9avjIRZFSc

I feel like Sebastian Janikowski should just be made part-owner of the Raiders.

I love this man’s vision for the future:

Calling it now.
Tampa Bay picks up Sebastian Janikowski.
Raiders and Tampa make it to the Super Bowl.
Tied game with 6 seconds left and Janikowski kicks a 57 yarder to win.

Surely, a team like the Tampa Bay Buccaneers who literally lost multiple games last season because of inept kickers could use this veteran kicker in the locker room. And it’s high-time for Sebastian Janikowski to come back to the state of Florida.