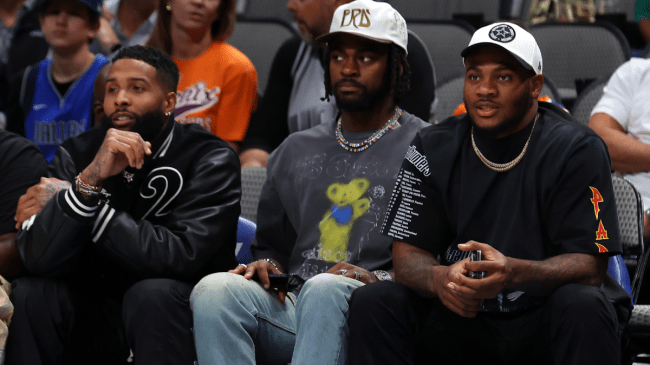 OBJ continues his free agency tour around the NFL. On Monday night, he sparked the interest of Cowboys fans as he was spotted with a pair of Dallas defenders in an NBA arena.

Beckham has been courted by his suitors over the last few weeks, which include Dallas, Kansas City, Buffalo, and the Giants. He recently took a visit to the Big Apple to hang with old team, leading many to believe he could wind up in New York. But it seems a different NFC East team is the top contender.

The Cowboys have long been considered one of the favorites to land OBJ’s services, and the pass catcher has been extremely positive of the organization on social media. There have also been murmurs that he’d prefer to play in a warm weather location, giving Dallas a huge leg up on those teams in New York.

The momentum picked up a bit more steam this week when Beckham was spotted sitting courtside with a pair of Cowboys players at a Mavericks’ game. Micah Parsons and Trevon Diggs led the recruiting visit as they made their best pitches for acquiring the wideout.

The basketball game didn’t hurt as the trio seemed to be enjoying themselves in American Airlines Arena. Fans immediately ran with the clips of OBJ in Dallas, posting reactions online.

One person wrote, “Yeah OBJ will be in a cowboy uniform real soon,” while another said, “It’s over Big Blue Gang,” referencing the Cowboys’ division rival in New York.

This fan posted, “Trevon, Micah, Dak, Zeke… If they sign OBJ, oh my. If this actually happens, I may have to get with the silver and royal blue.”

With Dallas sitting at 9-3 on the season, it’s certainly an exciting time to be a Cowboy. The excitement level will take off if they’re able to bring OBJ in for a potential Super Bowl run.