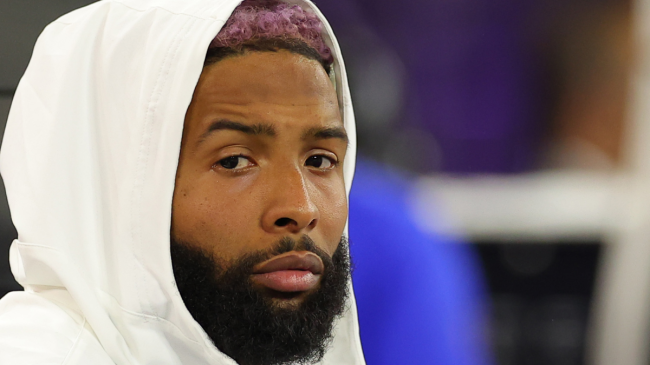 Odell Beckham Jr. continues to mull over his options in NFL free agency. A year removed from a Super Bowl title in Los Angeles, the superstar wide receiver is looking for his next destination midway through the 2022 season.

Beckham played for both the Rams and Browns in 2021, putting up 44 catches and 537 yards through 14 games. He then went off in the postseason, hauling in 21 receptions for 288 yards in just four games. He appeared to be on his way to possible MVP honors in the Super Bowl matchup with the Bengals before tearing his ACL in the first half of play.

After a year of rehab, he’s eager to get back on the playing field, and there will be a number of parties interested in his services.

OBJ has been linked to the Chiefs, Bills, and Cowboys, as well as his former team, the New York Giants. He hyped up the fanbase of one of those suitors on Sunday.

While watching a little Sunday afternoon action, the Dallas Cowboys caught the eye of the talented pass catcher. Dem Boys laid the smackdown on the Vikings, beating Minnesota 40-3 and handing them their second loss of the season. The win helped Dallas improve to 7-3 and got them back into second place in the NFC East.

It didn’t take long for fans, players, and media to run with the comment.

Dallas defender Sam Williams posted his reaction upon hearing the news, responding with simply a smiley face emoji. He wasn’t the only person happy to hear OBJ talking about the Cowboys.

They Sure did. Make the right decision. https://t.co/EiRcXoDS5t

The Cowboys are still looking up at the Eagles in the division race, and maybe they’re only a playmaker away from making a title run. The overwhelming feeling is that Beckham is looking to lock in a multi-year deal as he gets to the backend of his playing career. There have also been murmurs that he’d rather play in a warm weather city, and Dallas fits the mold.

A decision is expected to be made in the coming weeks. If he does ultimately choose the Cowboys, he might lose a few of those supporters gained while playing with the division rival Giants over the beginning of his career. But he might also land another Super Bowl ring.