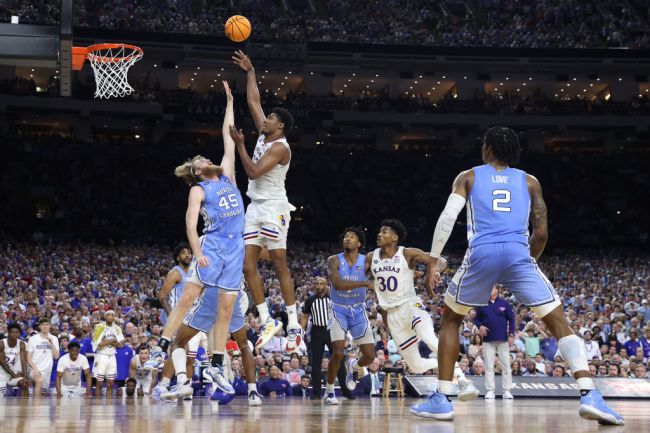 Coming into the NCAA Tournament, it was expected that if Kansas was going to have a chance to win it all, Ochai Agbaji was going to have to play like the star he had been all season long. That turned out to not be the case.

Agbaji played well during the tournament, but it ended up being a couple of his teammates that shouldered the biggest loads in their 6 game run. It was Remy Martin who put up 20 and 23 points against Creighton and Providence respectively in the Round of 32 and Sweet 16.

When it came to the Final Four, it was all about David McCormack. Still, it was Ochai Agbaji who walked away with Final Four’s Most Outstanding Player Award.

I just don’t understand how anybody watched the Final Four and came away thinking that Ochai Agbaji was its most outstanding player.

David McCormack put Kansas on his back for two games in the Final Four. Villanova had no answer for him on Saturday. He used his size to bully his way to 25 points and 9 rebounds against the Wildcats and help Kansas cruise to the title game. Agbaji scored 21 points and added 2 rebounds and an assist in that game.

In the NCAA Tournament Final, he was once again the team’s best player and had their biggest moments. With Kansas trailing by 1 with under a minute and half left, McCormack stepped up. He went to work in the paint and grabbed a rebound off of his own miss, and put it back up to give Kansas the lead. On their next possession, he extended the lead to 3.

Those were the last two buckets of the game, delivered the title for Kansas, and gave him 15 points and 10 rebounds. Agbaji had 12 points, 3 rebounds, and an assist.

That means that Agbaji had 33 points, 5 rebounds, and 2 assists in the Final Four. McCormack had 40 points, 19 rebounds, and the two biggest shots of the tournament.

I’m sure it’s not a distinction that a single member of the Kansas team cares about right now after bringing him the university’s 4th title, but McCormack should’ve gotten the recognition for how much of an impact he had for Kansas in the Final Four.